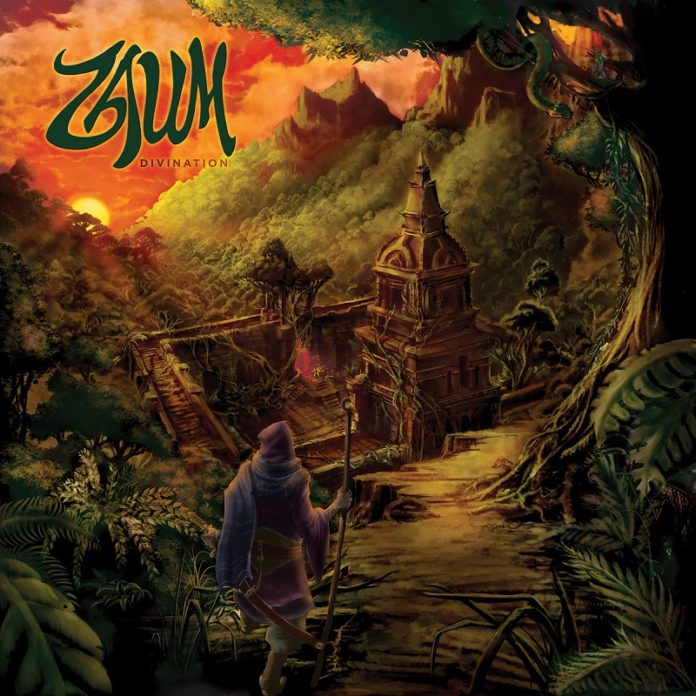 There are albums that, despite nominally belonging to a certain genre, can nevertheless be enjoyed by “outsiders.” Albums in which the music contains elements that resonate even with those who would otherwise stay clear of the genre as a whole. There are even artists that, in an attempt to gain more followers, will deliberately modify their sound and present their work in a way that appeals to as many people as possible. This is not what Zaum are doing.

From the get-go, Zaum make it clear that theirs is the kind of music that is meant to induce frightening hallucinations, and to be ideally accompanied by some sort of narcotic substance. Presenting what they refer to as “mantra doom,” Divination presents the kind of mantras that are not meant to help you find your center, but instead seek to induce a deep discomfort.

The soundtrack to the dark meditations that this album is sure to induce result from the combination of Eastern meditation music, mixed in with a slow and heavy doom, with slow riffings and deep growling vocals. Interestingly, the sense of discomfort that permeates the album goes beyond the doom sections, affecting even those parts in which the band relies exclusively on slow Eastern sounds (such as the beginning of “Relic”). It certainly serves as a testament to their skills that, regardless of the arsenal at their disposal, they are able to convey a sense of dread that seems to stick with you long after you’ve stopped listening.

For obvious reasons, Divination is not an easy album. It’s made to be enjoyed in peace and quiet, letting your thoughts wander into the darkest corners of your mind. If you’re not afraid of finding what lies in there, you should definitely check out this release.

While its strange format is not for everyone, fans of slow and heavy doom will find a fantastic new addition to their bong-accompanied evenings.
Reader Rating0 Votes
A fantastic mix of Eastern mantras and slow doom
Capable of inducing dread, while remaining completely enjoyable
Might induce perpetual dread
5