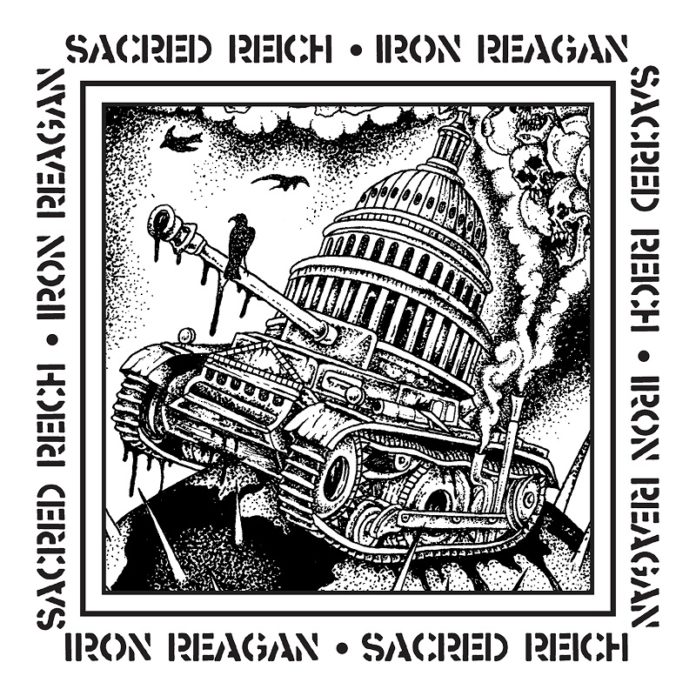 An interesting thing about music is that many people will connect to songs because of the melodies or rhythm, without actually knowing what the songs are about. I don’t mean ignorance of just the “meaning” of the songs,  but also of the lyrics. In the case of heavy metal, some fans will connect with the aggression, unaware of what exactly it is that they are headbanging to. While most of the time this isn’t an issue, there are occasions in which it can lead to pretty ridiculous situations.

I experienced this first hand when I made a video featuring Ministry‘s “Antifa” and my photos from their show, as right away I saw a surprising amount of fans complaining about how apparently Ministry had now become “too political” for their taste. Clearly they had never paid close attention to what their (extremely political) songs were about, or where Al Jourgensen‘s ideas come from.

A similar thing happened when I saw the reaction that some had against Sacred Reich‘s “Don’t Do it Donnie,” which they saw as “too political” or, funnier yet, a sign of the band joining the “leftist anti-Trump bandwagon”. Of course, it’s hard to reconcile such criticism with Sacred Reich‘s own discography, with their 1987 debut Ignorance already attacking the “death squad police of the right” in their song “Death Squad” but, then again, ignorance is bliss.

In “Don’t do it Donnie,” Sacred Reich have stayed true to their punk-infused thrash style, and made a blistering attack against the current occupant of the White House. In a fast-paced song that is at times reminiscent of the likes of Suicidal Tendencie, the Reich have produced what can only defined as a protest song, loudly lamenting the current state of the American political system, listing their laundry list of complaints against Trump. While not exactly a deep political treatise, it manages to effectively convey their point, even if in the form a moshpit anthem.

“They Scream,” Iron Reagan‘s contribution to the split, takes to the form of a furious thrash metal song that can easily bring memories of Slayer at their angriest. Tony Foresta‘s vocals are top notch , switching seamlessly between clean and growling vocals, albeit (as it’s his custom) singing so fast that it can be difficult to actually keep track of what he’s saying, beyond “what/who are you killing for!?”, which he repeats over and over.

As far as split goes, it’s difficult to pick the “winner” in this collaboration. While, musically, Iron Reagan‘s track does seem to be a bit weaker than Sacred Reich‘s offering, sometimes feeling a bit boring (even though they both last just under 2 minutes), the same cannot be said for the production. In this department, Sacred Reich, for better or worse, seemed to opt for a raw, old-school sound, while Iron Reagan presented a cleaner production altogether. While there are certainly those who appreciate productions that are a bit rough around the edges, reminding us of the underground, there are also those who want to appreciate each note.

Packing less than 4 minutes of total running time, this split is definitely a fun ride. Maybe not fun enough to buy a hard copy, but definitely a good addition to your streaming playlists.

Brief, powerful and straight to the point.
Reader Rating1 Vote
SR deliver a fantastic blend of punk and thrash
Iron Reagan's tune can come off as a bit boring
3.5