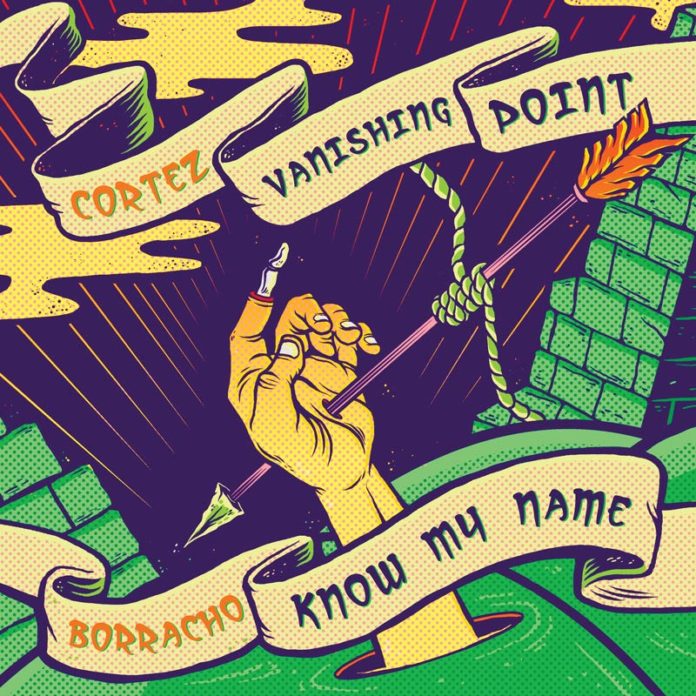 Borracho have been taking the stoner rock/metal world by storm, having shared the stage with such legendary bands as Saint Vitus, Fu Manchu and Jucifer. They’ve released two full-length records, both of which have garnered a lot of praise in the media, and have now released their latest split with Cortez.

Borracho’s track, “Know My Name,” starts off with a super fuzzed out guitar riff, followed by the whole band crashing in, and instantly makes the statement that Borracho are here to destroy some speakers. The music is of the desert rock variety, a la Fu Manchu, and rocks loud and hard. The vocals leave a little to be desired, having a bit of a gritty quality to them that sound like a mix between Lee Dorian of Cathedral and Scott Weiland, formerly of Stone Temple Pilots. There’s plenty of rock and roll swagger and attitude, but it’s not the most tuneful thing you’ve ever heard; this is sad, since the music itself is pretty rocking.

Cortez actually upstage Borracho a bit with their track, “Vanishing Point,” which features a faster tempo and a better vocal performance. The music is also planted firmly in the stoner genre, with the fuzzy guitars and bluesy solos, but with a more overtly metal feel. It’s similar to The Sword, but with better vocals, sung with a gritty feel and in a higher register than Borracho.

Overall, this split release can’t really be called anything more than just okay, despite Cortez’s valiant effort to release the kraken, so to speak. The riffs just don’t stand out from anything else in the genre, and while they do their best to ruin your sound system with volume, they’re also brought down, in Borracho’s case, with a poor vocal performance.