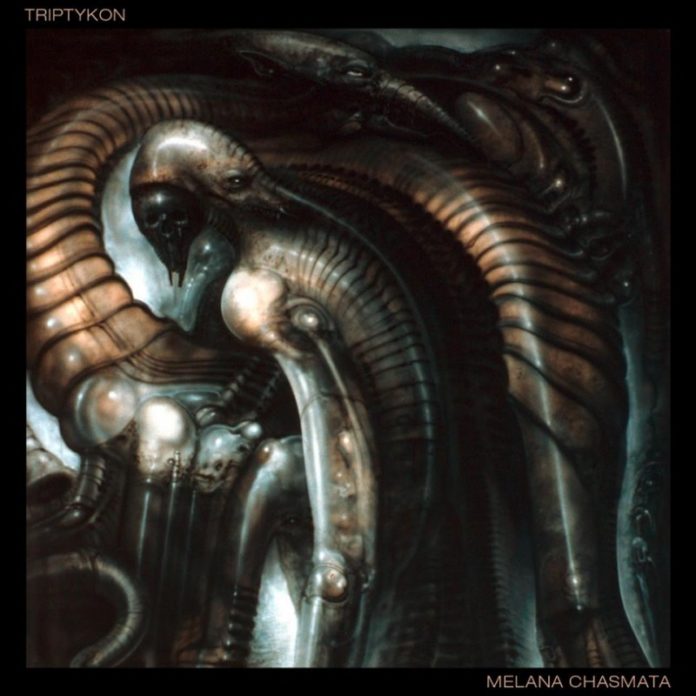 When dealing with new releases from artists as prolific as ex-Celtic Frost and Hellhammer vocalist Thomas Gabriel Fischer (better known by his stage name ‘Tom Warrior’), it’s very easy to be clouded by the nostalgia of their previous feats and influence. Fischer himself made an effort to air his grievances towards the past with Triptykon’s 2010 debut Eparistera Daimones, a record still reeling from the effects of Celtic Frost’s explosive breakup, draped in bitter animosity and spiteful passion. A significantly cathartic record both for fans and Fischer himself, and an emotional palate-cleansing for future records. Now four years later, Triptykon’s second full-length Melana Chasmata relinquishes its writer’s personal ties to deliver a violently-charged record which is both as disturbingly perverse and delicately intricate as the H.R. Giger painting which adorns the album sleeve.

At a glance, Chasmata’s flagship single ‘Breathing’ perfectly captures the essence of the record, from its bleak riffs to its punishing drumming and its dynamic range of influences, recalling doom, hardcore, gothic rock and even groove metal. But most important of all is the intensity in Fischer’s signature vocal delivery, aided throughout the record by flourishing male/female vocal duality with bassist Vanja Šlajh, often during the slower, more atmospheric sections. The band has really embraced these sections more since their last record, and thankfully so, with hefty passages of compact riffs broken up with carefully rehearsed, effects-laden and broodingly atmospheric jams opening up some breathing room before building up to the climax of a song. ‘Boleskine House’ is a great example; the double aural assault of mystic profanation from both vocalists, coupled with the tribalistic percussion and immense solo (reminiscent of early Meshuggah and more recent tech acts The Faceless) is as passionate as it is ominous and terrifying.

While the lyrical themes still cover a smattering of personal subjects, more eclectic influences are on display, such as the eight-minute elegy ‘The Sleep of Death’ acting as a tribute to Emily Brontë. The band’s diversity really shines throughout the record, most prominently through the sometimes bizarre instrumentation. One of the most memorable examples comes in the form of a bluesy twang solo during ‘Tree of Suffocating Souls’, resembling what can only be described as “Bron-Yr-Aur from the depths of hell”. While the diversity in a band’s influences can easily be its downfall, Triptykon bring them together under a cohesive banner of death metal sensibilities, with their more avant-garde elements never pulling them too far into archaic or pretentious territory. Their influences are distributed evenly throughout, giving each song a unique identity, such as the progressive doom dirge of ‘Black Snow’ to the slow-burning Sisters of Mercy crawl of ‘Aurora’. There’s even a prominent nod to old-school industrial that peaks on the track ‘Demon Seed’, experimenting with electronic cacophony over grizzly spoken word, primal drumming and binary guitar lines, creating a hugely unsettling and genuinely disturbing atmosphere, calling back to early Einstürzende Neubaten records.

Without the chains of his personal demons, Fischer has really excelled as a songwriter, with Triptykon creating one of the most unique metal albums you’ll experience this year. Grappling with a dual nature of ‘straightforward’ and ‘progressive’, it’s easy to picture Melana Chasmata as the gateway to dozens of genres for blossoming young metal fans. The songs really have a lot of weight to them, urging you to delve deeper and explore the intricacies within on repeated listens. It’s an oddly charming album in its scope and performance; you can tell there’s been a lot of love put into it, especially on Fischer’s vocals on some of the songs, where you can’t help but picture him having the time of his life performing his lines. It’s a hugely entertaining, absorbing and thrilling album from the band, and deserves your fullest attention. Right now.