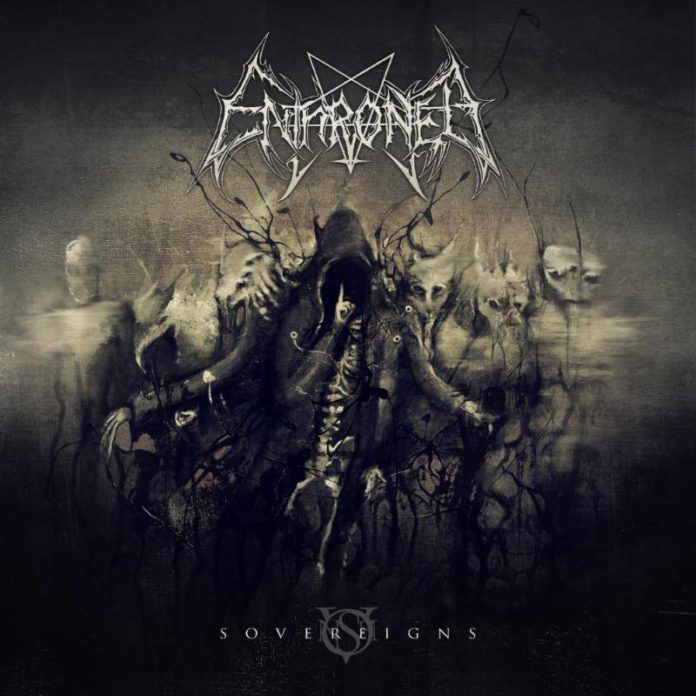 As a band, Enthroned have stayed surprisingly consistent in their sonic output, particularly when you consider that there aren’t any original members left in the line-up. Although vocalist Nornagest has been in the band since 1995, he’s only been the lead vocalist since 2007, after the band parted ways with long-time vocalist Lord Sabathan. Having 3 records under his belt, Nornagest has had ample opportunity to prove himself as a worthy heir, and has continued to prove to the metal world that Enthroned is a force to be reckoned with.

Sovereigns starts off with an intro track called “Anteloquium”, and which sounds like it could be in a movie score, in a scene where some vast, dark army is marching into a wasteland, preparing to destroy anyone that gets in their way. It’s an epic intro and a great mood setter, followed up by the best track on the album, “Sine Qua Non.” This track has everything I could possibly want in a black metal song: slow moody riffs that give you a sense of foreboding, with some truly malevolent multi-tracked vocals, and which then builds into a total maelstrom of black metal fury. This is a heavy bastard of a track and, in and of itself, is almost worth the price of admission. Enthroned have turned up the atmosphere on Sovereigns, at times putting off some really creepy vibes, while having a slightly melancholy undertone. There’s a lot of melody that you can pick out around the edges of the blastbeat and speed-picking fest that makes up most of the songs; there’s an old-school feel to the chord progressions, which will have fans of Satyricon and Gorgoroth rejoicing. “Lamp of Invisible Lights” is another stand-out track, with an eerie vibe and some ultra-heavy riffing, and Nornagest howling with absolute hellfire over it all; Neraath and ZarZax lay down some impressively heavy guitar-tracks, while Menthor blasts like a machine on the drum kit. Phorgath, the bass player, cuts through the mix now and again throughout the album but, like many black metal bassists, is typically buried by the rest of the band’s sound levels.

The lack of bass in the mix is just a small part of a bigger problem with this album; though there are many epic moments, and there’s enough atmosphere to go around when it comes to the songwriting, this is all marred by a stubbornly classic approach to production. The guitars and drums can get a little monotonous, largely due to the thin guitar tones, and the massive drum tones, made mostly of bass and snare blasts. There’s not much low-end when the band gets into the faster sections, and while Nornagest’s vocal performance is excellent, the vocals are just too high in the mix for my taste, and can be a bit overpowering. Although when things slow down, the production is a bit better, so the levels are just right and you can hear all the separate notes, this actually makes for a pretty random listening experience; one minute your adrenaline is pumping and you can’t help but smile at the sheer intensity, and then the next minute you’re yawning because the production drags the mood down. This is a shame, because Nornagest and company have taken the time to write some excellent material, and the songs really deserve a top-tier production job.

Sovereigns has a lot of awe-inspiring moments, and showcases a band that are showing no signs of slowing down; ultimately, however, the album is dragged down by a lackluster production. Fans of classic black metal from the early 90s, as well as Enthroned fans that have stuck around for the Nornagest-fronted incarnation, will find a lot to like here, but if you like big in-your-face productions, you might want to look elsewhere.