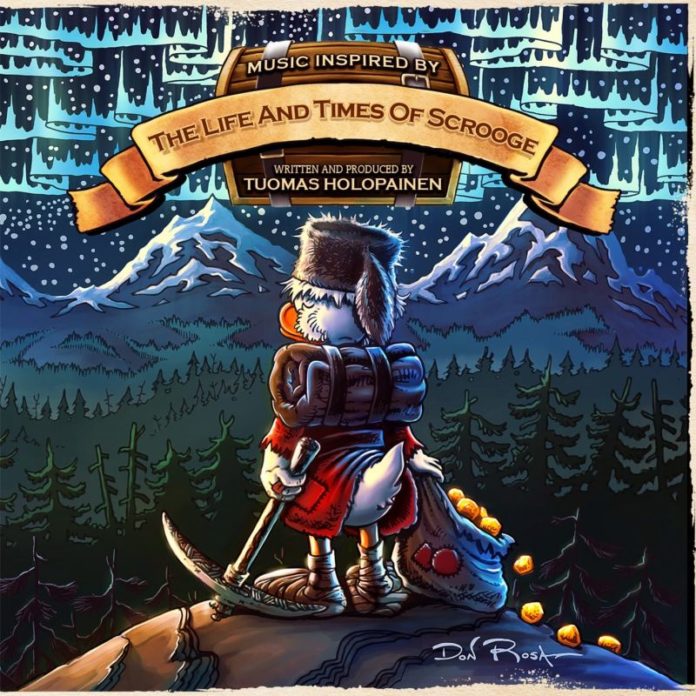 Like many others, I was very skeptical about Tuomas Holopainen’s musical project about Scrooge McDuck. Yeah, that Scrooge McDuck. It seemed like the kind of crackpot idea that could only come from the mind of someone who is living so deep inside his own asshole that music about a duck would seem like a worthy endeavor. I mean, after the movie Imaginaerum, which seemed like a 120-minute long masturbatory tribute to Tim Burton, I expected this to be, at best, like a b-side to one of Danny Elfman’s many Burton scores.

It’s always hard to analyze the work of someone like Tuomas Holopainen. On the one hand, as the man behind Nightwish, every single one of his projects will be assessed with that Finnish ensemble in mind. On the other, and this might come as a result of his appearance, sometimes it will be easy to dismiss him as trying too hard to be “artsy”. I might as well admit that I’m one of the idiots who, once in a while, is guilty of one or both of these things.

Tuomas has composed a soundtrack to a graphic novel about the famous duck millionaire. Devoted to the biography of Scrooge, this graphic novel has received never-ending critical acclaim and is still a very sought-after item, selling out as soon as it’s reissued. Although at first I had a hard time believing that it could really serve as the inspiration for a musical work, Tuomas has shown that my doubts were unfounded.

When approaching The Life and Times of Scrooge it is important to keep in mind that, despite Tuomas’ role, this is not a Nigthwish album, nor is it a metal album. What Tuomas attempted to do, and I believe he succeeded, was to create an atmospheric piece that will take you through the life of the beloved Disney character, conveying some of the feelings that are associated with each different stage, with the assistance of an orchestral ensemble. This has been done wonderfully, and every single track, from the instrumental to the lyrical pieces, is not only performed flawlessly, but also in a way that can truly touch you. As you listen to this wonderful record it is easy to just close your eyes and lose yourself in the magical world that Tuomas has created, as you feel the emotional rush going through you with every song, every note and every story. It is the kind of work that, just like an opera, needs to be listened from beginning to end; sure, you can pick a couple of songs and enjoy them on their own, but just like an aria is not an opera, a single song (even single-friendly ones like “A Lifetime of Adventure” featuring Johanna Kurkela, or “Cold Heart of the Klondike” featuring Toni Kakko) does not do justice to the totality of the work.

While this is the kind of album that you would expect from Hans Zimmer (e.g. Gladiator) or Danny Elfman when he’s not working for Tim Burton (e.g. The Unknown Known), what makes it unique is the fact that, unlike most soundtracks, this is a product of love. Tuomas’ project is not endorsed by Disney (and, to be honest, I’m surprised he’s not buried in lawsuits) and I have serious doubts that it will actually be profitable at all. Due to the problems affecting the music industry (some of which are the responsibility of the industry itself) albums are not as profitable as before, and are often a way to promote a tour, instead of vice versa, as used to be the case. The fact that Tuomas’ work here simply cannot be taken on the road only increases my admiration for him, since he undertook an expensive and exhausting project simply because he loved it so much.

The Life and Times of Scrooge is the kind of album that you simply owe it to yourself to listen to. Don’t let yourself be fooled by its appearance; this is far from children’s music. If there was ever an album that could inspire a movie, this is it.

Disney, the ball is in your court.

Agreed. I’m listening to it now and in tears. I grew up loving Scrooge and his life’s story and this album feels so right. It’s so beautiful and bright yet sad and so very, very fitting.