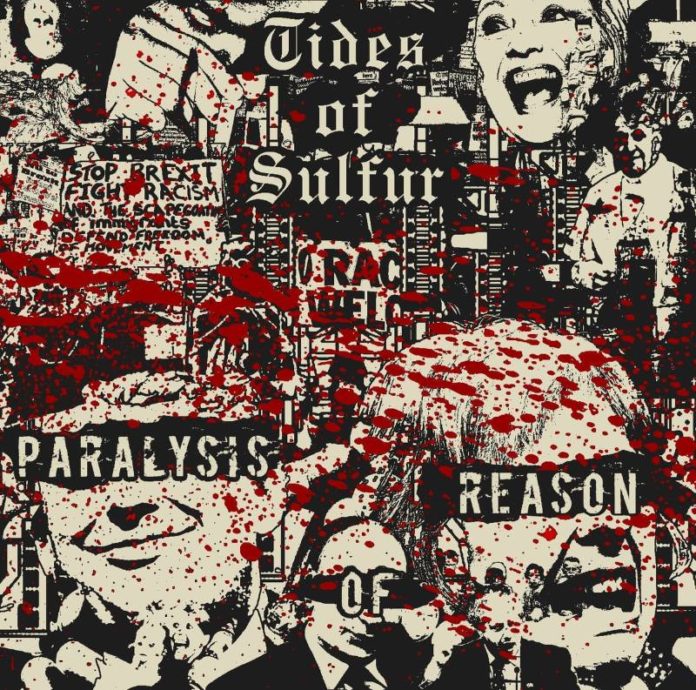 Having last heard Tides of Sulfur on their split with The Air Turned to Acid back in 2015 (since their 2016 full-length debut somehow slipped under my radar) I was curious to hear how they’d developed since then. Even before beginning this EP, it was evident that their morbid wryness and way with words were intact, as evidenced by track titles like “Pariah” and “Humourless Cunt”.

Jumping in with “Worms”, it was quickly evident that they’d made themselves comfortable with higher tempos, as the thrashy drum-beats flowed right into the harshly effects-treated vocals that felt like the clearest link to their slower sludge past. A crowbar’s edge on the guitar and a battering pace of punked-out aggression keep the tune sharp through its run-time of under two minutes, before a spoken sample sets the stage for the aforementioned “Humourless Cunt”. Said track continues the high-pressure sludge blasts, but finds some space in the breaks for slowed brooding to go with the gnashing nastiness, and it rides its blistering grooves slickly enough to invite some headbanging for their quick runs. Choice drops of further topical samples make for an enjoyably vulgar icing on the cake.

“DLMM” picks up from there with renewed anger, wriggling about in its riffs at a comparatively slow gear, but spewing out wrathful condemnations and sonic pus just as hard. “Pariah” continues the deceleration for its intro, but the manic drum fills soon twist it right back into neck-snapping beater territory. With the title track, the band takes seven minutes to finalize their statements, drawing from the preceding songs for a wide range of speeds and intensities, with a looped sample from a dead comedian showing up in the end stretch to underline the EP’s points.

Venomous acrimony and some hellishly dirty presentation aid the EP in its great job of highlighting the punk side of sludge’s heritage without losing the low-end weight. There’s no doubt to be had that the band is expressing themselves honestly, and the rawness on display is something fairly rare in the mass of today’s jaded sludge output. Well worth checking out if that’s something you’ve been missing, or if you need a reminder that something doesn’t have to have ‘blackened’ as a descriptor to be almost virulently uncomfortable in its aggression.

THE BOTTOM LINE
Harsh, violent sludge with more variance packed into its short run-time than one might expect
Reader Rating0 Votes
POSITIVES
Genuinely angry sludge
Intense performances
Quick demonstrations that the band is well aware of how to tap into the more groove-friendly side of their style
NEGATIVES
Somewhat disjointed
Ends just as the band really hits stride
4