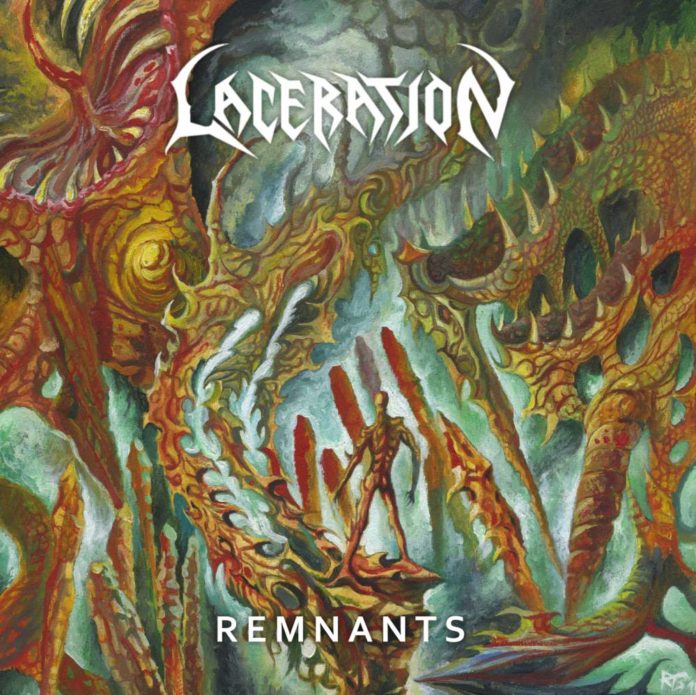 Formed in 2006, Laceration play a classic form of thrashy death metal reminiscent of Scream Bloody Gore and Leprosy-era Death. There are no gimmicks, no synthesizers, no costumes, just fast, heavy death metal with no frills. Remnants, their latest release, is a compilation record that collects all the tracks from their Realms of the Unconscious and Consuming Reality EPs, as well the tracks from their split with Tinnitus. The musicianship isn’t overly technical, though the lead guitar work is sometimes pretty impressive. Rather than confuse listeners with flashy six-string pyrotechnics or jazzy time-signatures, Laceration goes for the gut-punch with some thrashy, pounding riffs that will have you wanting to hit the closest circle pit. “Self Deprivation” is a particular high point, with a melodic lead guitar bit over a mid-paced intro riff, providing a bit of atmosphere before giving away to a quick, groovy riff. The vocals remind me of Chuck Schuldiner’s trademark snarl, with a slightly higher-pitched tone than the usual gruff death metal grunts.

Regrettably, Laceration’s older material doesn’t seem to have been remixed or remastered at all, meaning that there is a noticeable difference in quality between them and the newer tracks. It’s a shame that all the tunes didn’t get a little polish and shine, so as to give the album a more consistent sound quality.

Laceration - Remnants
Laceration's classic take on death/thrash puts the focus on riffs and grooves
Reader Rating0 Votes
Fast, heavy riffs with an old-school edge
The perfect mix between early Death and Demolition Hammer
No frills, no gimmicks, just riffs
There's not much of a change-up in the formula, which can get a bit repetitive
You can tell that this was pieced together from multiple releases, since the sound quality varies between the older and newer tracks
4