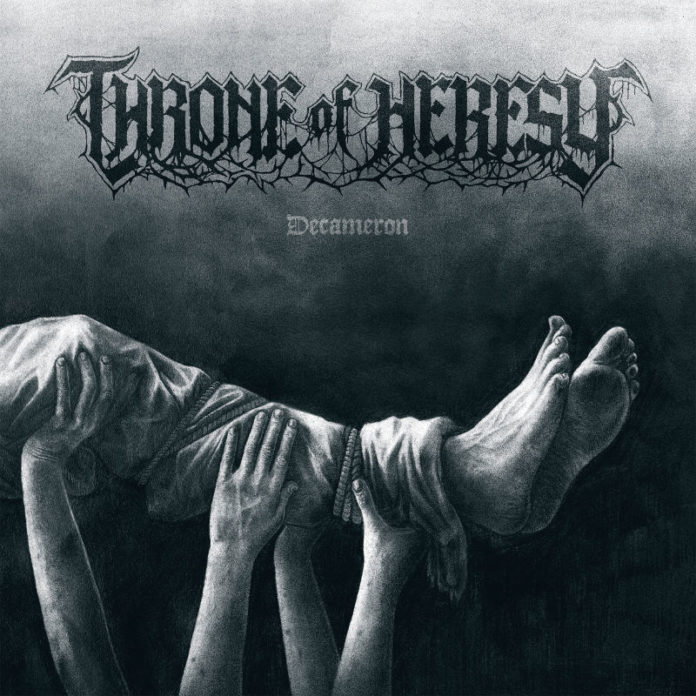 The world being what it is these days, the field seems pretty ripe for music focusing on the domains of the four horsemen of the apocalypse. And while Death and War get plenty of thematic coverage and homage in metal, the other two (Pestilence and Famine) tend to get underutilized. Throne of Heresy‘s new album Decameron staunches that imbalance by focusing on the Black Plague, rising from its humble beginnings to its peak devastation. They approach the subject with a blend of death and black metal, heavy on the death, with the drums blistering away in a near-seizure of blitzing.

While the guitarist gets to throw in some neat hooks, especially with the tighter-curled riffs, the dual assault of drums and bass sweep things pretty handily away from the other players. That doesn’t work against the music too much, honestly, but it does give things an off-kilter feel with all that weight in the low-end. It works for them, though, and the band storms along with few signs of the skewing throwing them off of their game. At the same time, there’s not much variety from song to song, and even the longer pieces feel like the standard-length songs with some extra bridges.

This is probably the most disappointing aspect of the album. While ToH have assembled ten songs that are each solid on their own, when they are all played together they make the album feel too repetitive and thin on ideas to really justify the concept album presentation. Things don’t move from subtle infection to full-blown panic, though they do flirt with some symphonic theatrics in the later songs; the heights of intensity are pretty much defined with the first track, and little deviation follows that initial mark.  And for an album built around the idea of an infection spreading from person to person, town to town, continent to continent, it just feels like the music is far too small to do their aims justice.

THE BOTTOM LINE
Some cool moments, and each of the songs is good on its own, but the repetition drags down the music long before it reaches the end
Reader Rating0 Votes
POSITIVES
Good band chemistry
Powerful drums
Snappy guitar-work
NEGATIVES
Just not enough ideas active for an album-length affair
3.5