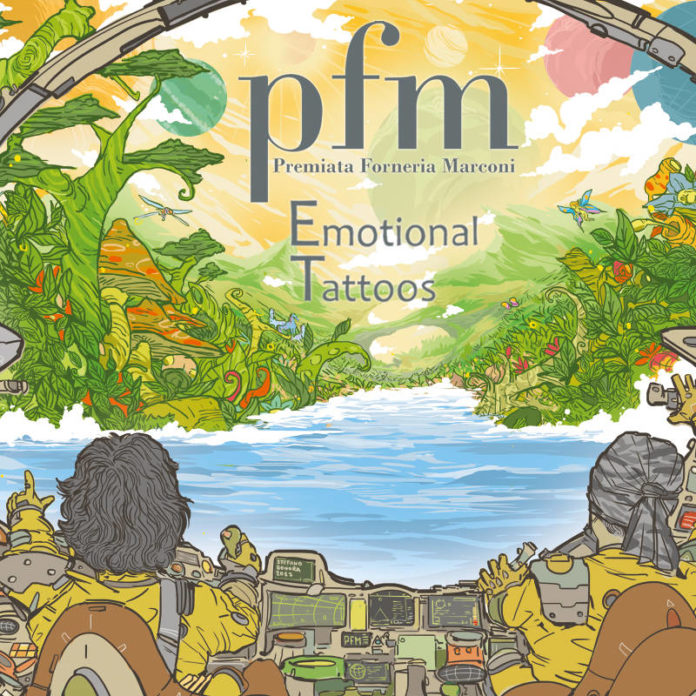 As the band’s been around since 1970, it would be hard to argue that Premiata Forneria Marconi are short on experience or perspective, and with about twenty studio albums to their catalog, it’s just as hard to imagine that they haven’t already tried out most of the technical tricks in the book when it comes to record-making. In that context, their decision to release this new album in both English and Italian versions (packaged together as a double-CD set) is odd, but not the shock it would have been coming from a less established group. For fairly arbitrary reasons (mainly my lack of Italian language knowledge past what would be used on a menu), I’m reviewing the English version, and hoping that it’s not a Kraftwerk situation in which the sung language changes the beats to match its meter.

The press for this album’s release heralds it as “the return of the band’s trademark sound,” and while I’m sure PFM have covered a considerable stretch of stylistic ground in their nearly half a century, it certainly does sound like an embrace of the 1970s’ softer prog approaches. Emphasis on one or two instruments for the break-downs and slim bridges is pair with warm production to create something that sounds exuberantly expansive without clutter. Comparisons to all the big ’70s prog acts could be made, and would be somewhat fitting, but the confidence the band shows in its playing is of a level that’s hard to imagine belonging to any band that hasn’t put in the time to earn it.

Along with that recreation of the ’70s sound also comes the frippery, with noodly keyboard solos, harmonizations and counter-point rhythms out the whazoo, and vocals that edge up against falsetto at times. There are shifts in the exact make-up of the instruments used but, for the most part, the album keeps a fairly steady mood and style going, and it comes off as something of a ‘comfort zone’ LP, in spite of the evident skill and complexity put into each of the songs. For a rock song to just keep its stride going when it suddenly throws in fiddles is no mean feat, but that’s just one of the instances in which PFM show their wealth of experience on Emotional Tattoos.

If you’re into prog rock at all, it’s worth giving this album a go (in either language). It may feel a bit old-hat, and there’s riffs on it which will almost certainly sound more than slightly familiar, but the performances are so smooth in delivering their high-quality playfulness, the slight mustiness to the song-writing style is easily forgiven. Throw it on without worrying about what year it came out, and let the grooves do their work.

THE BOTTOM LINE
Impressive, and as far as retreadings of '70s prog go, you can do a lot worse than to get it from one of the bands which actively shaped that dynamic
Reader Rating0 Votes
POSITIVES
The sound of a band that has high confidence and the skills to back it up
NEGATIVES
Feels a little too entrenched in the sounds of the past, though as it's intentionally a return to form, this is a small fault
4