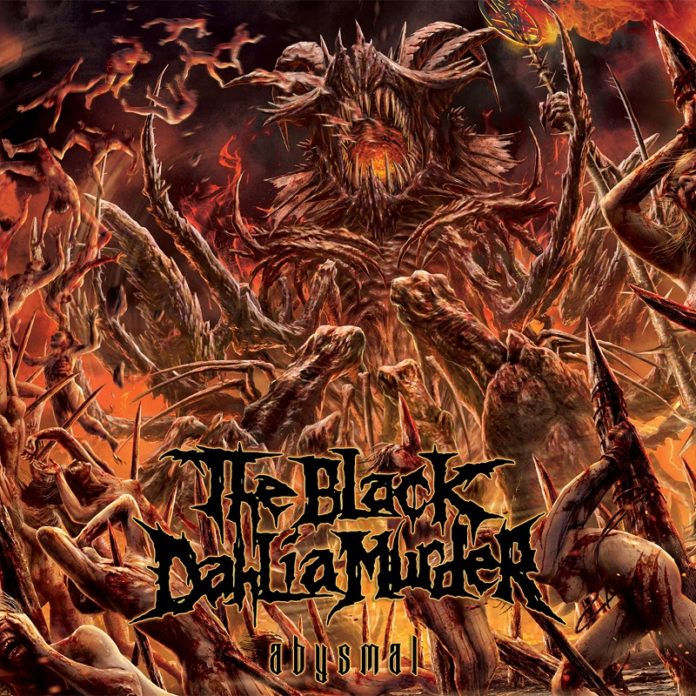 I’m a sucker for strings, so the menacing pizzicato intro of “Receipt” had me by the short and curly right off the bat. Trevor Strnad carries this pizzicato along with his syncopated vocals. The opening track to Abysmal isn’t that far from what could be considered the standard Black Dahlia Murder sound, but I don’t care. It reeled me in. Fast, in your face, blasty, yes.

Now that’s out of the way, let’s move on.

In true Black Dahlia Murder fashion, the incredible melodic guitar solos from Ryan Knight stand out in their own right. If there was an album with nothing but these solos, I’d still listen to it, repeatedly. I can honestly say I’ve yet to find a lead guitarist who can create solos with such consideration to the underlying rhythm while still pushing the limits of shrediness and melody without overstepping it. The longest solo is during the track “The Fog”, which would make this track instantly become my personal favourite.

The Black Dahlia Murder come in two speeds: Fast, and not so fast. OK, they might bring the tempo once or twice like in “Stygiophobic” for example, but this is a short lived rare occurrence. Fans of wide variation in speed may feel this album falls short for this, but if you want an all out, in your face experience Abysmal is exactly what you need in your life.

IN A NUTSHELL
Abysmal delivers exactly what's expected without pushing the envelope greatly. The Black Dahlia Murder fans should have nothing to gripe about.
POSITIVES
Those solos, holy shit those solos.
NEGATIVES
Tempo connoisseurs may feel that Abysmal's range of speed is... Abysmal?
4