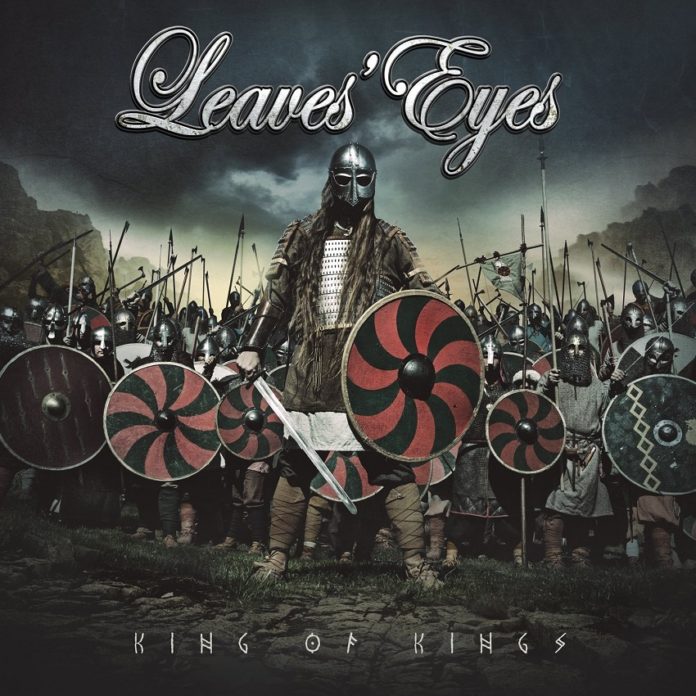 There is always something of a pinch of excitement when a symphonic metal release lands on my desk. Growing up with Scottish traditional reels and strathspeys, I have always had an interest in folk music. Although Leaves’ Eyes’ latest release, King of Kings, bases all of its imagery and songs on Viking history, the musical style is a wide range of worldwide traditional folk music. A concept album, King of Kings tells the story of Harald Halvdansson, a Norwegian king. The listener is treated to a smorgasbord of faux world music influences ranging from Native American-inspired chants to the twee melodies found in a renaissance fayre.

The Celtic inspired “Sweven” is a haunting chant that introduces both the album and the story of King Harald. The song tells of the prophecy that Harald will play a vital role in Norway’s medieval history. Through calm chanting, the sense of anticipation is dramatic yet subdued, which is a fantastic way to open the album with Liv Kristine’s classically-trained vocals calmly weaving throughout.

Although Kristine provides a consistently powerful performance, at some points she has to rely on Alexander Krull to provide a second style to create a more varied vocal dynamic. This is where the release falls short. Krull’s voice is quite simply abysmal. Although I agree that such variation is needed, surely a better vocalist could have been used. Even more disappointing is the fact that Krull is no newbie. He has had a long career to hone his voice, yet still sounds like a metal vocalist’s first attempts at shouting into a microphone in a garage rehearsal, at that stage before a vocalist discovers technique. Thankfully, his vocal contributions are few and do not bring down the quality too much.

Not able to tie down a consistent musical style, the song “Vengeance Venom” sounds more ‘sea shanty’ than ‘medieval Norwegian’ and would not be out of place on an Alestorm album (although with some changes to the lyrics, of course, to something about drinking, wenches, more drinking and maybe some in-jokes). The similarity isn’t that surprising when I find out the song tells the story of a joyous feast… with plenty of booze on tap.

The varied styles within symphonic metal are very welcome in the album. Far too many bands within the genre seem to have one song on repeat. This album is thankfully lacking in similar tracks, and here there is a very clear distinction between songs, which helps carry the overarching storytelling of the concept.

While the overall quality of King of Kings is quite high, it can sound a little ‘DIY’ at times. Despite the powerful musical elements, the album sounds slightly unpolished, which is a shame as the subject matter and writing are so epic. The strings in particular, which feature heavily, sound very midi, which kills any illusion of an incredible symphony orchestra. Thank Odin for Kristine’s beautiful voice.

IN A NUTSHELL
An epic concept album that, despite some shortcomings, does not disappoint. Chants, epic orchestras, powerful riffs and a classic voice. Everything you'd want from a symphonic metal release.
POSITIVES
The overarching concept story of King of Kings helps the song-flow greatly, which in turn boosts the theatrical side of the album.
NEGATIVES
Alexander Krull's weak performance affects the overall quality of any song he's featured in. While I agree with the dynamic he is trying to achieve, his lack of technique creates a noticeable drop in power of the track.
3.5