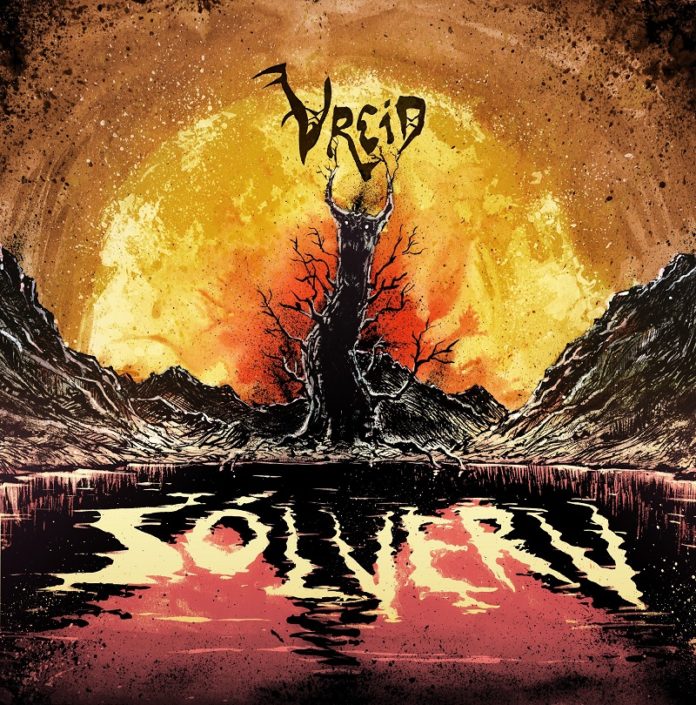 Sólverv, the seventh album released by Vreid in their tenure of just over a decade, comes across as a strong instance of modern Norwegian black metal (at least compared to the admittedly small portion of similar efforts I’ve seen in the past couple of years). By the words of their press release, the recording of this album saw the band put themselves into relative hermitage by taking a break from live shows to focus on songwriting; this has definitely paid off, since the results are excellent.

Staggered change-up beats from drummer Steingrim give the music a sense of controlled instability when he’s not bashing out quick’n’steady, and while the guitars don’t do much that could honestly be called ‘new,’ the energy behind them and the portioning out of the shredding (instead of going full blast all the time) gives it more clarity of expression than a grittier hammering might have yielded. There’s a similar approach going on with the vocals, which rasp and gargle without blowing out the cords by doing it incessantly, and the breaks to let the instruments get the spot-light do both sides a good service. A nod to the bassist, Hváll, should also be made, as his part rarely gets to stand alone in the songs, though it’s played with as much heat as the rest (and it does get a great solo bridge in “Ætti sitt Fjedl”); given that he’s also the songwriter, there’s an extra bit of kudos for not over-expanding his instrument to the detriment of the tracks.

Vreid keep the album moving along at their own pace, with linking momentum that rarely gets so overt as to distract from the individual songs. After the first few tracks establish their violent cred, Vreid hit some successful stretches on the atmospheric side of BM and veer back into the high-speed lane to close out the album, with a set of valleys built into the last three or so songs before they rocket off in the closer. A word of acknowledgement to this track, “Fridom med daudens klang”, which fully (or at least damn near close) earns having its convergent harmony ring out as they reach the end to put a dramatic cap on things.

Over the course of the album there are a few lapses in the black metal staunchness to work in some death-like melodies (“Geitaskadl” stands out as one of the most obvious examples), but these moments have a smooth enough integration that most casual listeners shouldn’t have a problem with their presence. Vreid don’t come off as being particularly dogmatic about their musical heritage, which will be enough to throw off some people immediately, but it’s definitely an album that every black metal fan should give at least one shot.

IN A NUTSHELL
Strong modern black metal, though purists may (as always) find something to rag on.
POSITIVES
Good headbouncing material, effective atmospheric portions, great work from each instrument.
NEGATIVES
A little too heavy with the throw-back BM sections, might leave you wishing they'd gone more furious at some point.
4