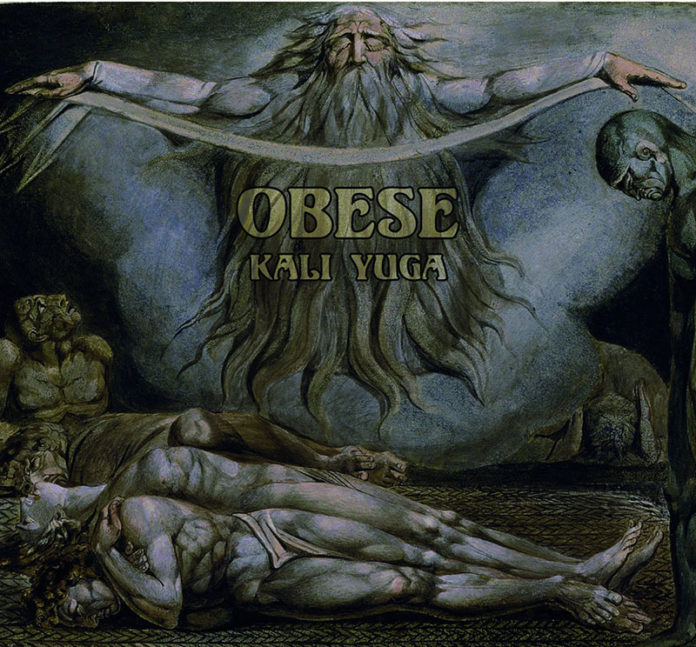 A name like ‘Obese’ creates a few assumptions about the band before you even hear them.  While just taking a look at one of their band photos can eliminate the assumptions about their physical health, that still leaves the question of whether their sound lives up to the name.  Obese bill themselves as stoner sludge, and while there’s plenty of bands in the first half of their genre-pairing with a sound described as ‘fat’, sludge tends to be a bit leaner, even if the traditional use of long buzzy feedback stretches helps to hide that.

Despite seeming kind of presumptuous for spelling their name in all caps all over their debut, Obese do bring the two musical halves together in a satisfactory way (and, hell, putting their balls out on display isn’t really at odds with the music at all).  The bass and guitar do indeed work the tube-amping to get a broad-wave sound going, which serves as the main focus for the album’s nine songs.  They might be angling for comparisons to High On Fire a little too hard, but their emulation of rough-edged and broad-stroked crags isn’t too bad, even if at times some ’70s cock rock can be heard influencing the riffs.

The album holds back on the desert-rat attitude all the way to the second track, “Rite of Fire”, at which point Obese start making known their taste for trashed and sloshed blues rock.  Though there are a few odd touches and interruptions (such as the college-horror film reading at the end of “The Bitter Blast”, or the surprise appearance of a riff from Phantom of the Opera), there’s enough pedal-love wrapped around the vast majority of it to keep most fuzz-heads satisfied.  At the same time, while I wouldn’t call it dishonest or disengaged, there’s something that feels a little hollow about Kali Yuga when it’s all taken as one serving.

By setting their high-energy slop-thrash as their main gear, Obese have given themselves a problem of sounding like they’re in neutral when they shift to slower stuff, and being able to come off well at low speeds is something near-essential to both halves of their genre fielding.  On the other side of it, they don’t have much room to speed up before breaking out of sludge entirely, though they get some cool results when they do (see penultimate track “Bow” for an eruption of bottled-up energy), while the regularity of their noisy blow-outs (and all but the last song being in the 4:00-5:20 range) starts under-cutting itself before the album’s out.

There are good ideas at work in Kali Yuga, and the 9-minute closer “Begetter Dead Letter” shows how good they can be when they pull out the stops; but despite Obese‘s focus on roughness, they are ideas in need of sharpening.  This being a first album, it’s hard to fault them for showing off as many sides to their sound as they can, but if their next one hasn’t trimmed some flab, they’ll likely disappear in the large number of similar-sounding bands.

Marilyn Manson – We Are Chaos