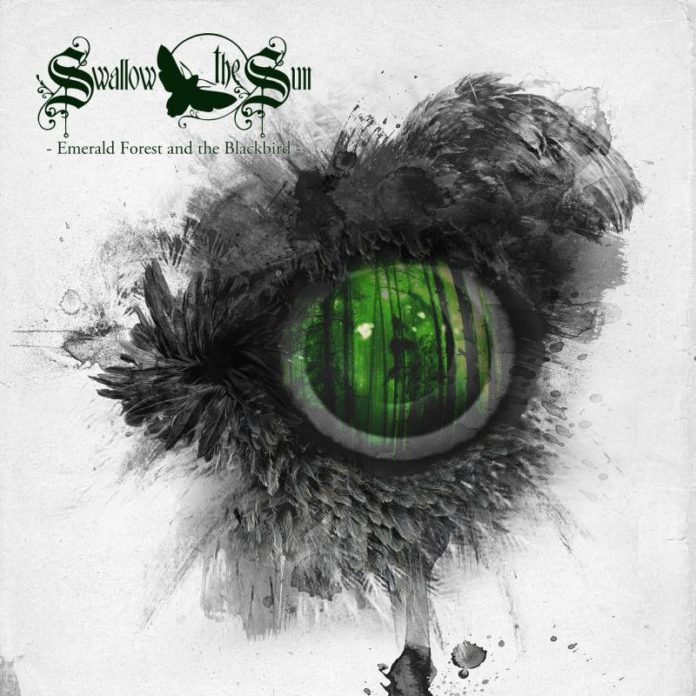 I gotta clear up two things before we get this started: 1) Swallow the Sun’s new album, Emerald Forest and the Blackbird, was originally released in the spring in Europe, but it’s not getting a North American release until September 4, so it’s new to us Yanks. 2) Their last album, New Moon, was completely awesome. It was death/doom with a heavy focus on atmosphere and a sense of palpable darkness permeating every note, and as a result Emerald Forest was one of my most anticipated releases of the year. To my delight, it holds up brilliantly next to its predecessor – no less crushingly heavy, but the evil has been exchanged for a more nuanced, diverse exploration of sound. It’s not New Moon 2, and I’m excited about that.

Swallow the Sun have added some new elements to their sound; the new record prominently features acoustic guitars, and for the first time every element the band employs is put to good use. The opening title track, based on a Finnish fairy tale, evokes the fantastic feeling of its source material wonderfully without sacrificing the brooding doom metal feel the band captures so well. A lot of fairy tales are pretty dark if you really think about them, and this song nails it perfectly. Kudos go out to vocalist Mikko Kotamäki, who is the rare extreme metal vocalist who can pull off both highs and lows with astonishing timbre and fury.

The album has an excellent flow to it – I thought “This Cut Is the Deepest” and “Hate, Lead the Way” were one song when I first listened to this album while driving. The coherency is part of what makes this record so strong. Though not a concept record, the songs fit together from an orchestration standpoint, perfectly sequenced and arranged. “Cathedral Walls” features the band in prime moping mood, punctuated by guest vocals by Annette Olzon of Nightwish. Later, Swallow the Sun enter one of their rare full-burn, high-speed metal attack moments to great effect. It’s the album’s single, and while it’s a good song, it’s a poor single choice in my mind, but then again, a doom metal record doesn’t offer much single material. Later, on “Labyrinth of London”, drummer Kai Hahto pulls an unexpected trick and lets the double bass go full-blast. The dude must be warming up for a new Wintersun record finally coming out, but it’s another cool, unexpected element that keeps this record interesting. What really makes any doom record, though, is the heaviness of the riffs, which are brought in spades.

The all-star of this album is keyboardist Aleksi Munter, whose reserved atmospheric layers and melancholic piano lines give the album an extra layer of sadness and misery – “Hearts Wide Shut” is a prime example of this. See also his dramatic organ intro to the nightmarish “April 14th” and its horror story imagery and lyricism. He sidles up against an echoing, lonely guitar and a morose spoken word bit; it really sells the track. His diverse sounds and keen ear for harmony and counterpoint elevate these recordings to the next level.

Emerald Forest and the Blackbird is more polished and nuanced than some might expect from their doom metal, but it’s vibrant and varied enough to be a must-have record for metal fans of any stripe. It’s less evil than its predecessor, but sometimes a little diversity can be a good thing.[signoff predefined=”Signoff 1″][/signoff]