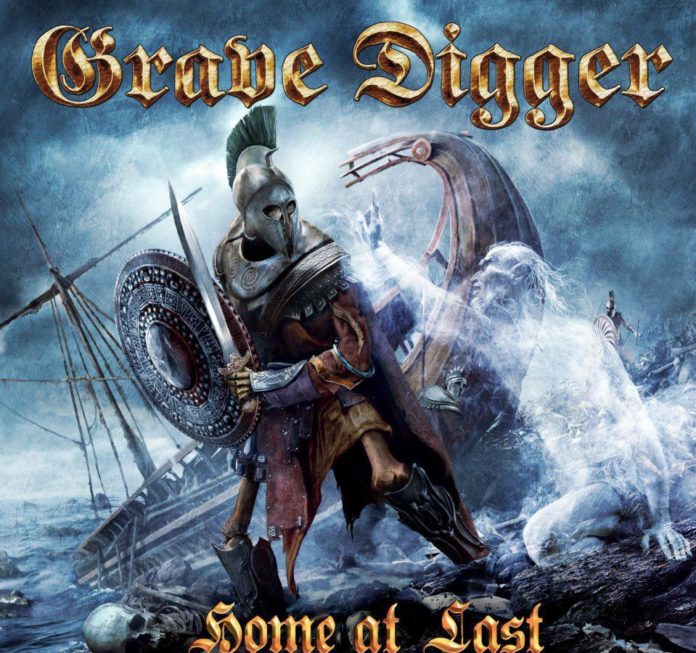 The German Heavy Metal legends need no special introduction. Emerging from the fallout of Accept’s international success, Grave Digger was a member of a New Wave of German Heavy Metal, along with Running Wild, Helloween and Rage. Their most critically acclaimed album, “Tunes of War” was released much later, in 1996. After its 2010 follow-up, “The Clans will Rise Again,” the Diggers are back with a new album “Clash of the Gods” and this EP to give us a taste of it.

“Home at Last” contains three new songs (two of which are exclusive to this release) and three live tracks from their latest live album/DVD “The Clans are Still Marching.” The title track is a classic sing-along track with superb drumming, great guitar work and an amazing drunken-choir chorus. For those who may not know, the album deals with ancient Greek mythology and judging by this track the record is going to be another Grave Digger classic. The second track, “Rage of the Savage Beast” does a great job of invoking the 80’s NWOHM feeling with a modern production. The last studio track on the EP is “Heavy Metal Never Dies,” and its name speaks for itself – a traditional Heavy Metal anthem with a catchy chorus. Chris Boltendahl’s vocals sound as powerful as ever and Axel Ritt’s guitar sound is becoming a recognizable trademark in Grave Digger’s music.
The live tracks were recorded at Wacken Open Air 2010, and are the encore of the set that featured the aforementioned “Tunes of War” played in its entirety. They represent the entire Grave Digger’s career: “Ballad of a Hangman” comes from a recent release, “Excalibur” is a jewel from the 90’s and “Heavy Metal Breakdown” takes us to the earliest days of the band. The recording is superb, and echoes the feeling between the band and the audience.

Overall, this is a solid EP release that will find its way to every hardcore Grave Digger fan’s heart, and for the rest it is a great taste of the new album. The Diggers are simply one of those bands that stay true to their sound and always find their way to their fans. The EP and most likely the new record therefore won’t be anything revolutionary or unexpected – the band simply does what they do best, and that is playing some good old Hard and Heavy Metal.