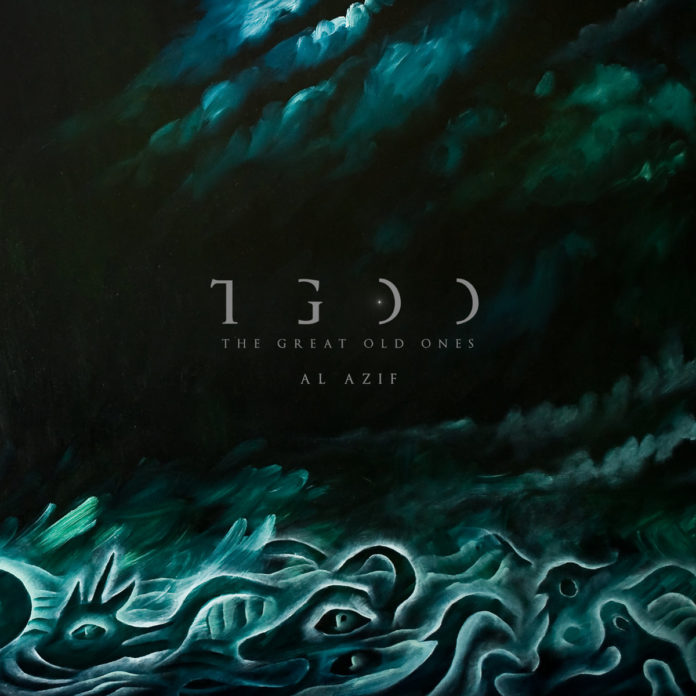 Quite possibly the most influential horror writer of the last century, the stories of H.P. Lovecraft pale in comparison only to the masterworks of Edgar Allan Poe. Classic tropes such as the town full of weirdos, the strange rites of unspeakable cults, and unfathomable evils beyond the feeble comprehension of mortal man originate straight from his pen, and both horror writers and metal lyricists owe more to him than they could ever possibly repay. However, though our debt to Lovecraft no doubt outsizes the cyclopean walls of R’lyeh itself, very few metal groups have created compositions able to transmit the scope and grandeur of his writings. There are a few exceptions, most notably the relentless assault of early Morbid Angel or the psychedelic dirges of Electric Wizard, but only a select few bands have been able to capture a maddening, otherworldly feel to match their Lovecraftian inspiration. Recent French black metal upstarts The Great Old Ones, however, have crafted an engrossing set of hymns from beyond that leave the listener entranced, mesmerized, and just a little bit warped in the mind by the end.

The musical style of Al-Azif can best be described as black metal, but that’s almost like saying Cthulhu could best be described as a squid. There’s so much more here than your typical Frankish black metal dissonance in the style of Blut Aus Nord or Deathspell Omega – the songs are ringed in with majestically doomy anthems, and lighter interludes that lightly flirt with jazz break up the chaos and let the listener briefly come up for air. The marriage of so many disparate elements of music usually signals an “avant-garde” circlejerk, but The Great Old Ones are somehow able to weave it all together into a dizzying tapestry of blackened majesty. The three guitars on the album twist and turn through intricate melodies and expertly-crafted harmonies with just the right amount of dissonance to set you on edge – much like arriving in Innsmouth for the first time, you can tell that there’s something slightly “off” about all this under the surface. Most songs either scrape or exceed the ten-minute mark, and I’m going to level with you – most of them blend together and can sound almost indistinguishable. But it’s not the individual songs you’re going to remember, but rather the individual moments – the thunderous emergence of “Al-Azif,” the eerily beautiful harmonies that close out “Visions of R’lyeh,” the tremolo-picked guitars that arc over the crawl of “Jonas,” the mournful cello that rings in “Rue d’Auseil” before its black metal fury subsides into a jazzy break – much like Pallbearer’s Sorrow and Extinction, this is an album that greatly rewards patience and attention. There’s a wealth of brilliance going on just under the surface that might not be readily apparent, but that’s not to say you won’t be drawn into the undertow yourself!

My only real complaint with the record is that it could have been just a bit more mind-bending – for all its Lovecraftian inspiration, The Great Old Ones have really just made a more accessible version of the works of DSO and BAN. Granted, those two can be actively difficult to listen to, so something more palatable is not altogether unwelcome. The album often lacks a certain punchy gravitas, but that being said The Great Old Ones have managed a truly impressive record in Al-Azif. They could have fallen into the pits of masturbatory mathcore, tedious technicality, and gloriously failed avant-garde experimentation, but they have instead created a black metal album that sounds not only unique, but often gripping. This would work well as the soundtrack to the sleepless dreams of a Lovecraftian protagonist, tormented with ethereal and entrancing visions from beyond and voices from the void, catching fleeting glimpses of an ancient truth mankind was not meant to know. It’s the moment of mystery and awestruck grandeur one would experience upon glimpsing Cthulhu asleep in His Dead City, right before he opens his eye and looks right the fuck at you. But until he awakens, enjoy the entrancing sounds from beyond that The Great Old Ones have conjured up.

As I Lay Dying – Awakened