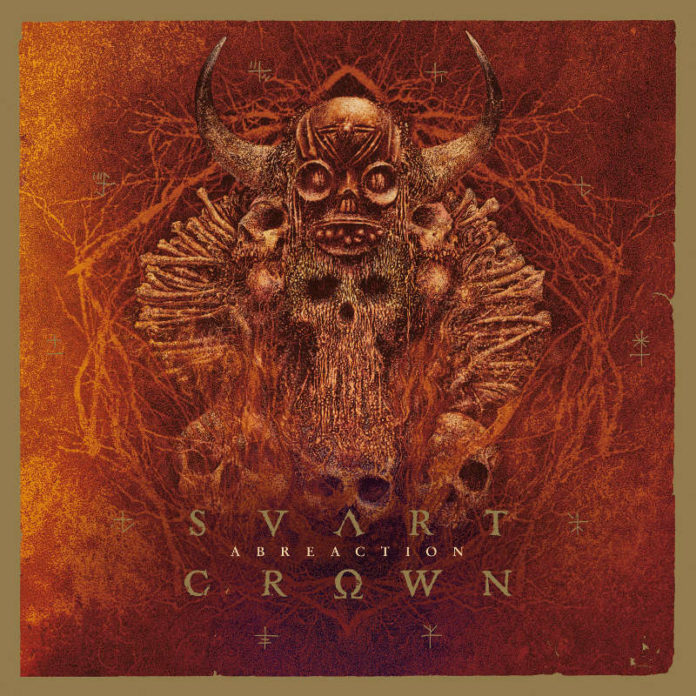 Almost half a decade after their last album, Svart Crown are back, under a new label (Century Media), and with a new drummer and a new guitarist (Kévin Paradis and Kevin Verlay respectively). It’s not all shake-ups though, as they’ve kept fellow Frenchman Francis Caste on production/engineering duties, with vocalist/guitarist/front-man Jean-Baptiste le Bail and bassist Ludovic Veyssière holding fast in their respective duties.

Whatever disruption of old song-crafting habits the switching of two members might have introduced, the end results show that the band was able to make it work, and work rather well at that. Blistering lashes of drum-skins, stormy bass churning, and keening guitar are joined by vocals which do strong work with both the deep growls and higher howls, and the songs keep up a fast pace without feeling too repetitive. While I’d identify black metal as the heart of the musical style Svart Crown use in Abreaction, there’s a significant amount of death metal structuring to it, which tempers the snarls and blitzkriegs with measured dramatics, while also giving the drumming more of a spotlight in both the mixing and song structuring, than it usually receives in black metal.

The band does play with some slower tempos at times, such as the increasingly layered breakdown of “The Pact: To The Devil His Due”, but speed is a principal element in the album’s alchemy, allowing the wrath of the songs to come pouring out with little held back. At the same time, the music gives a strong sense of a band which has matured over the course of its existence, and the balance struck between fundamentals and experimentation is one which feels like it was as rewarding for the band to assemble as it is to hear. The few songs of the album which break the six-minute mark (including the powerful closer “Nganda”) are packed with so much energy and development that they genuinely earn their lengthiness, rather than being just the half-hearted grab at gravitas which crops up too often in metal.

Though I’m usually more partial to black metal than death metal, I feel there’s an interesting enough fusion in Abreaction to draw in fans from both sides, even those who usually wouldn’t be interested in dilution of their chosen genre. It’s a thoroughly strong album, one which will likely earn regular play in many listeners’ rotation, and with the band having announced hopes to tour heavily in support of it, Abreaction will hopefully gain the exposure it deserves.  If not, it’ll be a strong argument for this world being as shitty as the pessimistic lyrics paint it to be; then again, that would likely fuel an even angrier follow-up record.