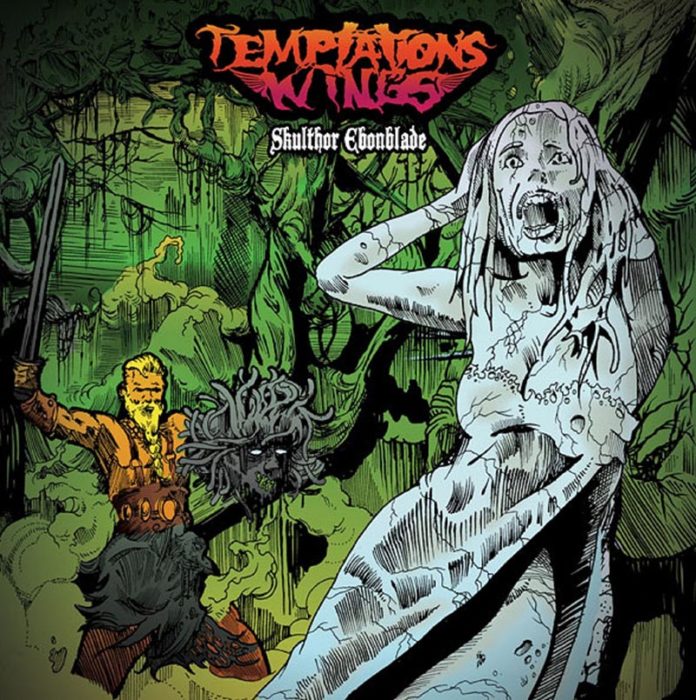 My preconceived notions of doom metal were all thrown out the window when I first heard “Solitude,” on Epicus Doomicus Metallicus. I guess I’d expected something closer to My Dying Bride, having assumed that all doom was gothic sounding, and was essentially just slowed down death metal. I had a similar awakening when I first heard Electric Wizard’s Dopethrone; I didn’t know anything so slow could be so damn heavy! North Carolina’s Temptation’s Wings proved once again that I shouldn’t judge a book by its cover.

When I saw the cover for Skulthor Ebonblade, the latest release from Temptation’s Wings, I assumed the record would probably be a sludge record in the vein of Mastodon, and I couldn’t have been any more wrong. The opening chords on “Burning of Hjalmar” have a melancholy tone, and an almost classical sounding progression. “I Destroyer,” however, really took me by surprise, sounding like the really early material from The Sword, if they had Messiah Marcolin on vocals. There’s definitely a southern-tinge to the music, more in attitude than in choice of melody, since the riffs have a classic heavy metal vibe, with some pretty killer lead-guitar bits, coupled with some crunchy, heavy riffs. If Candlemass were formed in the bayous of Louisiana, instead of Sweden, and Messiah had a slightly gruffer tone, this is exactly what they would sound like. “To Forge a Legend (Ulfbehrt)” starts off with a very Tony Iommi-esque riff, before going into a choppy southern sludge galloping rhythm, and is one of my favorite tracks of the record.

The production in the album is pretty clean, though sometimes it comes of a little “too clean”, as I would have liked to hear a little bit more sustain in some of the guitar bits, and a little less choppy sounding-rhythms. Still, Temptation’s Wings have created a pretty unique sound that puts them a little ahead of the curve. With a classic sound, as well as mythological lyrics evoking images of Vikings and battle, I would definitely recommend any fan of heavy music picking up a copy of Skulthor Ebonblade.