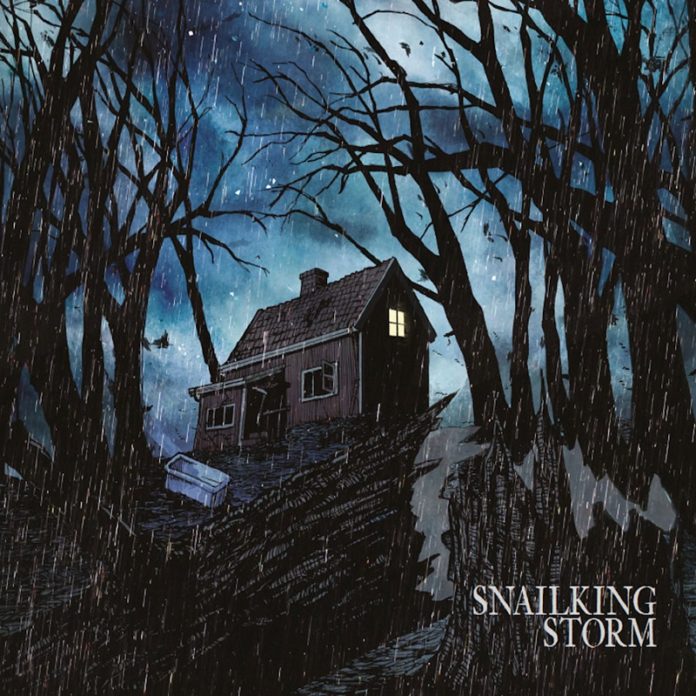 Following up from their highly-praised demo EP Samsara two years ago, Snailking‘s long-awaited, monolithic full-length Storm is finally in our midst. Hailing from Sweden, and the next in a mighty generation of Scandinavian doom metallers, the three piece’s music is nothing short of ominous and intimidating, but tinged with throwbacks to fuzzed-out 80s protogrunge and retro psychedelia housed within its mile-high walls of dense, concentrated riffs and coated in a unique lo-fi gleam.

Despite the rather bizarre band name (taken from the Ufomammut album of the same name), Snailking allow no leeway in the tongue-in-cheek department. Mirroring Eyehategod and Neurosis, Snailking‘s brand of nightmare-fueled stoner doom expresses some of the most hopeless and bleak atmospheres of the year.

One of the things that will immediately strike you about this record is the production, channelling that sought-after fuzzy retro aesthetic which tips a hat to the classic metal underground. The drowned-out, tape hiss production will be like repellent for some listeners more used to cleaner-sounding records, but traverse through the misty layers of fog obscuring the music, and you’ll happen upon some truly gargantuan, monstrous riffs adorning massive, impenetrable walls of aural doom. Even without uncovering the crushing wall of sound that makes Snailking sound like the mutant child of Jesu and Sleep, the production adds to the atmosphere in itself, like listening to vocalist Pontus Ottosson‘s muffled cries for help from a faulty ham radio as he wails ‘No escape / No turning back!’

While Ottosson‘s technique isn’t quite up to the standard of other stoner doom, he does do a fantastic job of amplifying the record’s grimey, bleak tone. Sounding like a more melodic Alex CF (Light Beared, ex Faul of Efrafa), his delivery sounds grungy and sleazy, but also demented and frightening; it’s like the dude’s taken one too many hits of acid and is now running frantically through the forest screaming about giant snails trying to eat his face.

If there’s something that Storm does incredibly well for a doom album, it’s the atmosphere. The music swirls, soars and descends all around as if you’re trapped in the middle of a never-ending downpour of gale-force riffs and forest-levelling percussion. It all coalesces into a hypnotic siren’s song of fuzz and distortion, and by the time you come to, you’re entangled deep within its web. Despite the lyrics sounding near-incomprehensible due to being so low in the mix, the imagery the music evokes from its mood alone is terrifying (the fantastic artwork on the album sleeve helps too!). From rabid dogs on shadowy moorlands, to brutal murders in small-town suburbs, Storm is the perfect soundtrack to total isolation out of pure fear. This is the record for drug induced paranoias, for watching shadowy figures stalk the hallways, and the resultant late night crying fits. You have been warned.