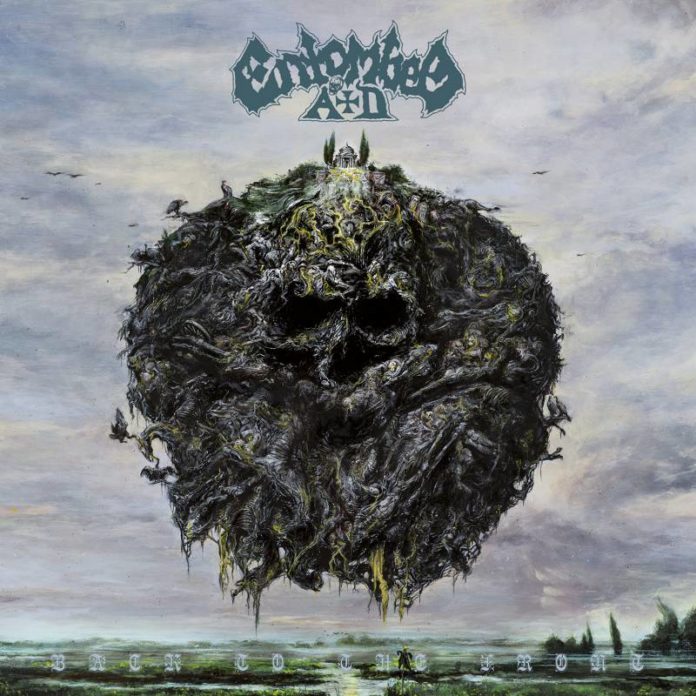 There are few bands as synonymous with the death and roll genre as Entombed. Although it has often been a controversial sub-genre , Entombed have been perfecting the sound since 1993’s Wolverine Blues. Towards the end of 2013 the band’s future became uncertain when founding guitarist Alex Hellid didn’t join the rest of the band for their tour. At this point things get a little confusing: Hellid performed Clandestine in it’s entirety complete with a full orchestra and former members of Entombed, while vocalist L-G Petrov recorded an album, intended to be a new Entombed record. After a legal dispute it was ruled that the Entombed name belonged to all four original members, forcing L-G Petrov’s incarnation to make a slight name-change to Entombed A.D.

Back To The Front is the album that L-G Petrov recorded, and which is finally getting to see the light of day after all the legal dust has settled. The name may say Entombed A.D. on the cover, but make no mistake, Back To The Front is truly an Entombed album. The elements are all there: downtuned and heavily overdriven guitar and bass work, a huge drum sound and guttural vocals that are half-yelled and half-growled. Petrov and company haven’t really missed a beat at all, despite the obstacles that nearly prevented them from releasing it.

Long-time fans will be able to put any doubts to rest after the first three songs, “Kill To Live,” “Bedlam Attack,” and “Pandemic Rage,” all of which could have been a part of any of the previous albums. The tricky part is making the established sound fresh, while giving the fans what they want, and yet Back To The Front has achieved that, and then some. In recent years there have been many bands borrow from the formula that Entombed created, Black Breath being a prime example, but with tracks like “Eternal Woe,” Entombed A.D. show everyone how it’s really done. The groove will have you bobbing your head instantly, and Petrov’s vocals are as strong as ever; while they aren’t exactly sung, the vocals have almost melodic changes in pitch despite their gruff nature.

The production breathes even more life into an already solid set of songs, with a slightly old-school tone. The guitars and bass sound like they’d fit right in on any early 90’s album by Grave or Dismember, though slightly higher in the mix, so as to not be over-powered by the absolutely massive drum sound. Despite the fuzzy tone on the guitars, the sound doesn’t get muddied up, even on thrashy numbers like “The Underminer,” which in a less capable producer’s hands could have actually been a real mess. Back To The Front isn’t flawless; there’s a section in “Vulture and The Traitor” where Petrov’s spoken voice is fed through some digital processors, with the coming off as a bit cheesy and dated, as if it was someone reading some spooky lines as a narrator on any random 80’s or 90’s metal album. Still, that’s s just one little bump, and the rest of the album makes it a mostly negligible one.

Entombed A.D. have released an excellent album that would stand up with anything else in the band’s previous incarnation, and also proves to be an impressive debut for the band’s next chapter. Fans of the original death metal sound might be disappointed that Back To The Front continues in the more groove oriented direction, but I suspect most of those fans have written these guys off a long time ago anyway. If you don’t mind a little more groove in your metal, you need a copy of this album, so you can see what all those Entombed fans have been gushing about all these years. This is a solid album, and I certainly look forward to seeing what else these guys have up their sleeves.