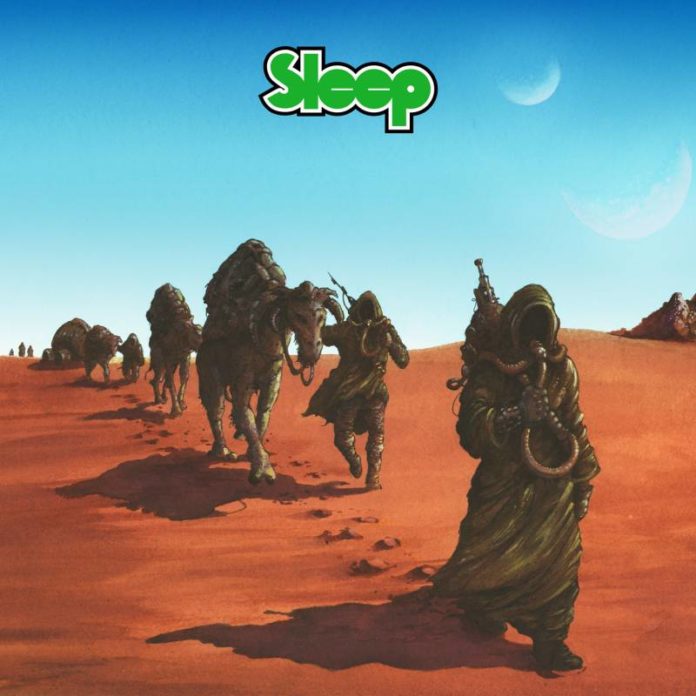 Editor’s Note: This is finals week, as all our students in the audience are well aware. Regrettably, Sam needed to go on temporary hiatus from his duties as a Metal Blast contributor to make sure he doesn’t flunk out of school. While he insisted on giving this album a 5/5, he instead had to hand this week’s review duties to his mother. Let’s give her a hell-raising Metal Blast welcome as she takes on one of the greatest stoner doom metal albums of all time!

I like to think I’m “hip-hop-happening” when it comes to music. I listen to a lot of the fun and quirky stuff my dear daughter shares with me like the Regina Specter lady, and it’s not as if I wasn’t a stranger to weird music before. I was at Woodstock, you know. But the kind of stuff my son listens to? He was always the black sheep of the family, and I tried my best to make him turn out okay, but he just got weirder and weirder. And there was nothing I could do to stop him from getting into this angry scream music he loves so much, like The Electric Wizards or Sunn Zero and the Three Close Parentheses. He had so much potential, my bubele! He could have been a doctor, or a lawyer, or even a rabbi, and he could have met a nice Jewish girl from a nice Jewish family and given me a few grandchildren to be proud of, but no. He just had to listen to bands like Sleep.

Sleep is a band from that weird part of California with the rainbow flags. They play something Sam called “stoner metal,” because I guess you have to be stoned to enjoy it. The album is called Dopesmoker and it has a picture of a bunch of camels and space men in the desert. The camels I understand, but why are the space men in the desert? Shouldn’t they be in space? It doesn’t make any sense. There’s one long song on the album also called “Dopesmoker,” and it’s an hour long. Why do you need to write songs that last an hour? Aren’t three minutes good enough for you? Why aren’t you happy with that? It really just seems like these Sleep fellows are all about excess – after the dope part, of course. Did you know that their guitar player has a guitar with nine strings? Why do you need nine strings on a guitar, why aren’t you happy with just six like everyone else? And why do you have so many guitars to begin with? Aren’t you satisfied with just one? But anyway, this one big song is basically the same few notes over and over and over again, played really slow and loud. I don’t know what the appeal of this is at all – or pot, for that matter. I smoked it once in college, but it just made me feel weird and sleepy. That’s what this album does to me too, come to think of it. I guess if you ran out of weed or something then you’d put this on and feel the same, but for G-d’s sake why would you want to? Don’t you have anything better to do with your life?

The best part about this is the lyrics, though – and by best, I mean funniest. They finally decide to start singing about seven minutes in, and it goes like “Drop out of life with bong in hand/Follow the smoke toward the riff-filled land.” Dylan this ain’t. I thought the sixties were over with the drug use and everything, and I would know, mind you. I was at Woodstock. But I guess Sleep were too stoned and forgot to get a new calendar, maybe. But sometimes they say things like “Sacred Israel, Holy Mountain Zion” or “Jordan river flows on forevermore,” and that’s pretty nice. The guitars almost sound like a shofar the way they hold out one note for a very long time, so whenever they write nice lyrics like that it’s almost like they were playing a service at the B’nai B’rith Temple, even though that would never happen. Especially not when the rest of the lyrics are about toking on doobies, like “Lungsmen unearth the creed of Hasheeshian.” What in the world is a lungsman?

In conclusion, Dopesmoker is slow and boring and way too long, the guitars are too loud, the bass is too rumbly, the singing is too much about weed, and the drums are too much just hitting everything at once. I thought I understood strange music like this after going to Woodstock, but this is just too much for me. It hurts me inside that my bubele spends all his time listening to trash like this, after all I’ve done for him. I brought him into this world, I raised him right, I taught him to get good grades in school, I sent him off to college, and he comes back with long hair and damaged eardrums and a funny smell and sends me music when he should be studying. Where did I go wrong, Lord? Why did you give me such a difficult child? At least he still brushes his teeth, otherwise he’d look even more  like their guitarist <a href=” Sam’s mom is a professor of intermediate knitting theory at a well-respected university in the Northeast United States. She spends her free time grooming the family dog, watching reruns of Buffy the Vampire Slayer, and being extremely disappointed in her son.