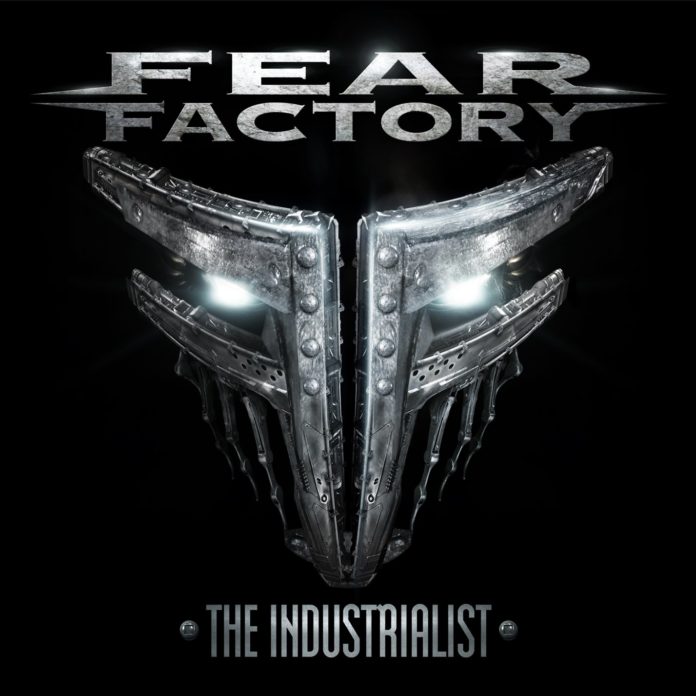 It has been over eight years since I last paid attention to anything that was put out under the Fear Factory moniker because they weren’t making any material that was similar to “Demanufacture“, “Obsolete“, or “Soul of a New Machine“.  Even when it was announced that Raymond Herrera (drums; Arkaea) and Christian Olde Wolbers (bass, guitars; Arkaea) were departing from the band so Dino Cazares (guitars; Asesino, Divine Heresy, ex-Brujeria) was to make his triumphant return, I still kept Fear Factory as written off.  Much like I did with the latest Soulfly album, I am giving these industrial/groove metal giants another chance to try and win me back with their new album, “The Industrialist“.

I was impressed with the way the band used the opening on the first song, ‘The Industrialist’, by incorporating a sound (excluding the filtered voice over) that was reminiscent of something that would come from “In Their Darkened Shrines” by Nile, which transcended into the trademark riffing of Dino.  This was the Fear Factory that I had always loved, and I was excited to see this kind of return to form.  ‘Recharger’ was no different except for the melodic chorus, which worked very well.  After these two songs, I was ready to proclaim that Fear Factory had come to a realization as to what those two circular glands encased in flesh that dangled between their legs were for.

While I could tell the band had definitely regained a lot of its old take-no-prisoners attitude, they still maintained that little bit of melody and experimented with some slower song structures, like ‘God Eater’, a plodding and melodic tune that spans nearly six minutes.  Even ‘Depraved Mind Murder’ is a wonderful blend of these two styles that the band is known for.  Unfortunately, after these five energetic songs is where “The Industrialist” begins to stumble.

What I mean by this is it seems that tracks like ‘Difference Engine’ and ‘Disassemble’ felt lifeless and hackneyed as soon as they start.  These are the types of Fear Factory songs that made me forget their existence in the first place, especially during the chorus of ‘Disassemble’ where Burton sounds like a high school kid trying to sing cleanly during a talent show and doing a miserable job of it.  Burton’s voice sounds great on this album, so I have no idea why he took that approach in this particular instance.  Not only that, but the opening riff of ‘Virus Of Faith’ is easily the most vicious in all of “The Industrialist“.  I was really hoping that the band would be able to capitalize on that genius and keep the energy going strong, but instead they just waste the rest of the song by basically re-writing ‘Slave Labor’ from “Archetype“.  However, it had to be the last track, ‘Human Augmentation’ that annoyed me the most.

When I saw it was just over nine minutes long, I figured I would be in for something that was similar to ‘Resurrection’ or ‘Zero Signal’, something ridiculously epic to cap off an album I really enjoyed.  Instead what I was met with was “bleep blorp heavy industrial noises we are machines Terminator boop beep“.  We get it, you guys are into this whole technological apocalypse stuff, give it a rest already.  The only semblance of music that was in ‘Human Augmentation’ was the droning rumble of Matt DeVries bass, which you really needed to pay close attention for because he is buried underneath all of the other needless crap that was packed in.  You won’t even get something new for the entire length of the song, either.  It’s just an endless loop of the same reoccurring sound effects.  This is what the band decides to end “The Industrialist” with?  I can’t think of a worse way to end an album such as this.  Unless you are Godflesh or Halo, then don’t do this.

I know I may have spent an enormous amount of time saying what I didn’t like about “The Industrialist“, but Fear Factory did a lot of things right this time around that must not be overlooked.  You can tell that Dino’s return has breathed some new life into the band and that is all we can hope for.  This album is by no means a return to their old days, but there are enough glimmers of hope to get me interested in this band again.  Now with the addition of Mike Heller of Malignancy* to be on drums for (hopefully) the next album, I will definitely be keeping my eyes on Fear Factory to see what they will come up with.

*Seriously, they are going to get this guy to play on a Fear Factory album?  That is one odd choice to me, but he will destroy both Raymond’s and Gene’s work if the band lets him do what he does best.

The Pariah – Divided by Choice