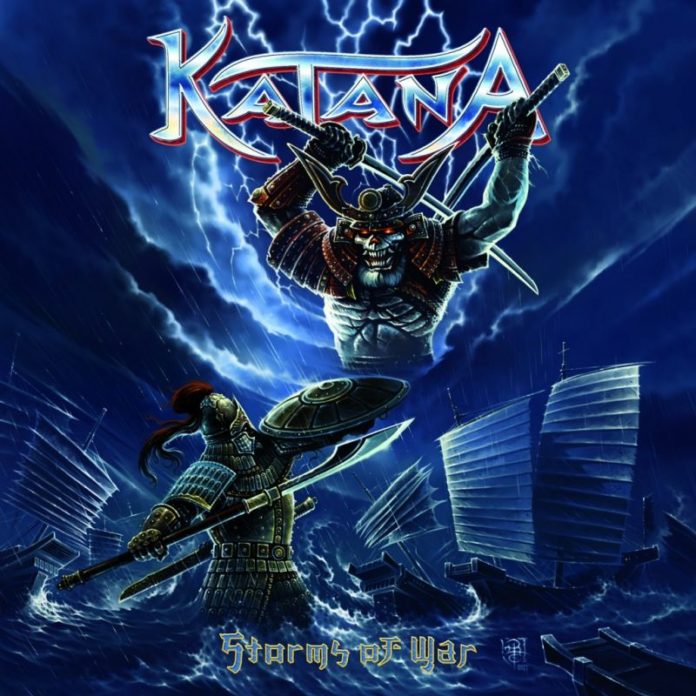 Every once in a while, a band comes around that assures you everything will be okay. In a crazy way, it’s like it’s okay for the other crappy bands to exist, because you know that there’s a band out there that “really gets it”.  Katana is definitely one of those bands that proves such with their sophomore album Storms of War. If I were married to metal, at this point I would be reaffirming my vows.

Storms of War is something amazing to listen to. It’s the type of album that if you’re listening to in public, you will be headbanging to, regardless of where you are.  The contestant Maiden-esque galloping rhythm, the hammering of the double bass and the roaring vocals is more than catchy, it’s downright infectious. Even after several spins, Storms of War still hasn’t worn old, and has only grown stronger. But even the first time out of the gate the album sounds amazing.  However, it’s the very specific traditional metal sound that will limit Katana’s appeal; it pushes them into a corner and may stop them from getting too much of a wide appeal. However, I don’t get the sensation that is a situation at all on the minds of the band members; they seem more than content on creating a solid metal album, then appealing to the masses.

Storms of War is perfect at capturing the roaring feel of 80’s metal in all its glory; everything from the vocal style, lyrical content to the harmony filled guitar solos; it’s simply a pleasure to listen to from start to finish. With gems laying around the entire album it’s hard to pick witch one is the outright best, but “Kublai Khan” “The Samurai Returns” and “The Wisdom of Edmond’s Fields” are some of the strongest song entries period, regardless of album or even genre. The craftsmanship of the songs is something to behold and while much can be said about the technical voracity of the group, it’s the songs themselves that make this album stand out; the vocal melodies and choruses deserve special recognition but you’ll find that out thirty seconds into any song. It’s very apparent that the 80s have found apt pupils in Katana.

Though the album verges dangerously close to early Iron Maiden at times (so much so that I felt like screaming “Children of the Damned” sometimes) it manages to find its own identity throughout the album; especially with drummer Anders Persson, his almost constant double bass gives a much heavier end to what traditional metal has been used to. Also worthy of noting King Diamond/Death guitar player Andy Laroque produced Storms of War and did one fine job; the mix is very clean and nothing is out of place, everything is set in place to let you concentrate on the songs themselves. All things combined, Storms of War is without a doubt, an instant classic. I have no doubt that this album will only help immensely boost the career of Katana, taking them from relatively obscure to mainstream success.

But lately, there has been a shift towards traditional metal; it seems that everything in the 80’s or early 90’s is being refreshed and repackaged: musical styles are reemerging, clothing styles are being readopted, but what does this mean? In 20 years when everything old is new again, what will people refresh? Can the sounds of Saxon, Judas Priest, Tokyo Blade and Manowar stand to be repeated a third time? It’s hard to say. But if artists like Katana keep at it like this, breathing new life into well remembered but long forgotten genre, we may be in luck.