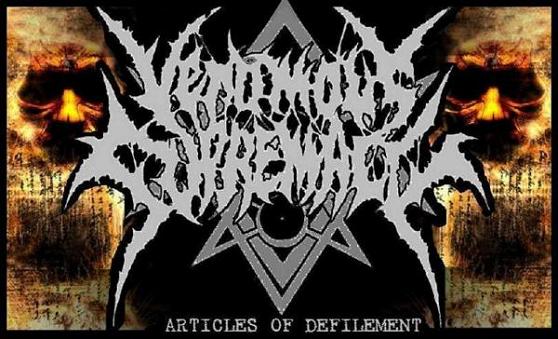 On their debut EP, “Articles Of Defilement“, we see Venomous Supremacy doing their best to bring some blackness to the sub-genre of brutal death metal.  Taking leads from bands such as Nailed and Deception, Jose Vidal (guitars, backing vocals; Christ Malformation, Christgrinder) and company are keen on wanting their name to be synonymous with the aforementioned groups.  We all know by now that Texas has some of the best brutal death metal to ever be recorded, but can Venomous Supremacy continue to carry that tattered and torn banner with pride?

When I listen to ‘Removal Of The Flesh’ I can’t say I hear “blackened brutal death metal” at all.  To me it just sounds like your standard brutal death metal, and while it isn’t bad, it isn’t exactly good, either.  The music is rather ho-hum most of the time, but there are nuggets of greatness that are strewn about, namely the leads in ‘Transcending Divinity’ and ‘Severing The Legend’.  Unfortunately, the rest of the music just fails to make that big of an impression, leaving me rather speechless for the most part.

However, there is an upside to this.  “Articles Of Defilement” was Jose’s first attempt at writing death metal songs, and I know for a fact that Venomous Supremacy is hard at work on writing new material.  Now that the band has some more seasoned members within their ranks, as well as Jose improving his song-writing, I can expect something much better in the future.  Like I said, there were some parts I enjoyed, and now it is just a matter of cutting off the fat and getting into the juicy death metal meat.