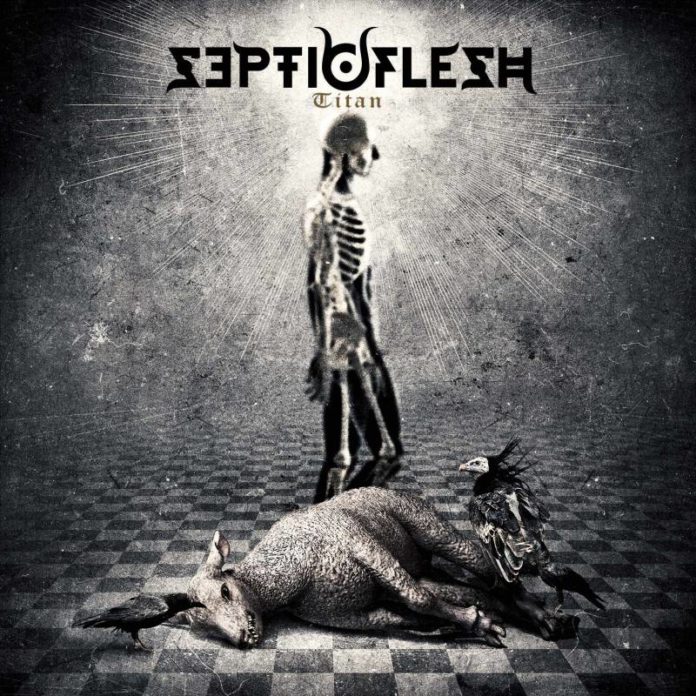 Septicflesh are a band who have strived to push boundaries over the years; having flirted with death, doom, black, and gothic metal, they have created some of the most original music in the extreme metal scene over the last two or three decades. Although the band suffered a split in 2003, 2007 saw their rebirth, not just with a slight name change (the previous incarnation went by “Septic Flesh”), but also, seemingly, a new zeal. Communion and The Great Mass saw the band dive headfirst into symphonic territory, with guitarist Christos writing and arranging full orchestral pieces, which were recorded by The Philharmonic Orchestra of Prague for each album.

Titan continues down the path set by Septicflesh in their second incarnation; highly cinematic dark metal with a heavy emphasis on symphonics and bombast, while still staying firmly rooted in death metal. Old-school fans need not fear, the riffs are still as punishing and heavy as ever; track number two, “Burn,” begins with a barrage of blast beats and furious guitars that walk a fine line between death metal and black metal, while the growled vocals sound absolutely malevolent. There are many changes in direction throughout Titan; sheer brutality gives way to stunningly beautiful orchestrations, and at times the music is truly terrifying. The orchestral and choral arrangements add a sense of growing horror to many of the songs, and “Prototype” is a terrific example of this; already an intense death metal piece, the orchestra gives the music a sense of urgency that’s typically reserved for scenes in movies where the protagonist is being chased by the villain. Not all of the experiments work, however; as much as I love “Prototype,” when the orchestra is working into a crescendo, the brass section does a really irritating high-pitched trill which can distract from the otherwise excellent music. On “Burn,” the clean vocals don’t mesh too well, mainly because the lower register “chanted” vocals make the melodic singing sound out of tune. However, there is still a lot going for Titan, and the good far outweighs the bad; “Prometheus” alone, for example, is worth the purchase of this album, with its over 6 and a half minutes of pure gothic ecstasy mixed with symphonic death/doom.

Production on Titan is handled by Logan Mader, who also has produced such bands as Cavalera Conspiracy, Divine Heresy, and DevilDriver, as well as having formerly played in Soulfly. With that kind of pedigree, you can expect a lot of crunchy guitars in the mix, pounding drums, and a big vocal presence; the orchestra is also a big part of this mix, though the transitions from pure metal to symphonic metal are a little bumpy at times, with the orchestral pieces sometimes sounding like they were a little haphazardly stitched onto the songs. This sort of messy transitions and combinations happen often, and you get the feeling that Logan really doesn’t know how to mix the orchestra with the band (something that, admittedly, does sound like a pretty daunting task). Overall, though, the mix is pretty decent, and barring a couple of failed experiments, Titan certainly lives up to its name.

Septicflesh continue to break new ground in terms of intensity and musical prowess, particularly Christos’ expert arrangements for The Philharmonic Orchestra of Prague. The music contained on Titan is both beautiful and nightmarish, which is a really hard balance to pull off; “Prometheus” is the kind of masterpiece that many bands go entire careers without being able to create, and is a true high-point for this excellent album. If you like extreme metal, then Titan needs to be in your collection.