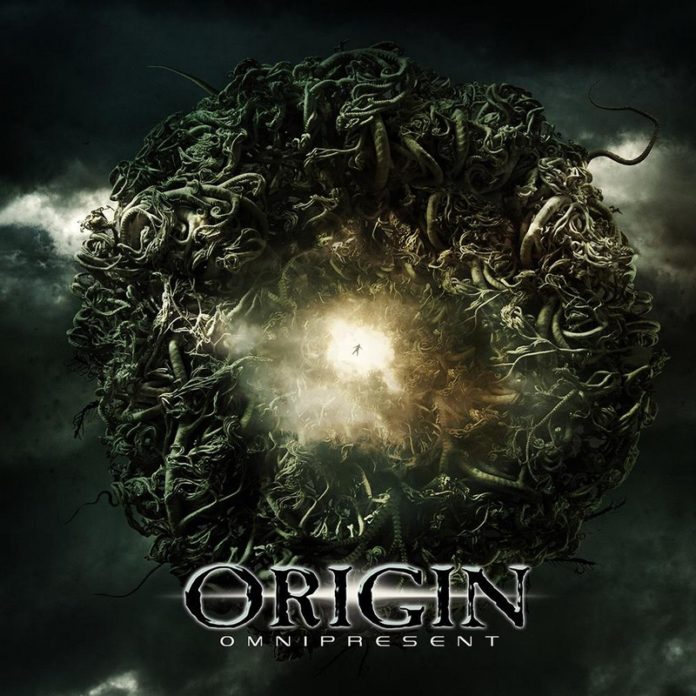 It is hard to imagine that three years have gone by since the release of Entity, Origin‘s last onslaught of tech-death brutality.  That record proved that the band could be just as mesmerizing and awe-inspiring as a three-piece, after the departure of vocalist James Lee and guitarist Jeremy Turner, and the addition of Jason Keyser (vocals; ex-Skinless). Not only did they manage to exceed my absurdly high expectations, but also raised the bar to a whole new level, even managing to displace Informis Infinitas Inhumanitas as my favorite Origin record. Clearly, Omnipresent, Origin’s latest release, has a lot to prove.

As in typical Origin fashion we are already at blistering speeds with “All Things Dead” and all four members seem to be at the top of their game. As I made my way through Omnipresent multiple times, I realized that it is a mixture of Antithesis and Entity. Since I always thought that Entity was rather chaotic, while Antithesis really showed the band’s song-writing skills, combining the two seemed like an interesting (although difficult) idea. The result? You get tracks like “Manifest Desolate”, “The Absurdity of What I Am”, “Source of Icon O”, “Unattainable Zero”, and “Malthusian Collapse”, which are all fast, heavy as hell, and intelligently engaging on their own.

In addition to the usual auditory apocalypse that we have come to expect from the group, they also threw in a few curve balls. There are a few tracks that serve as introductions and interludes; while this would usually bug the absolute shit out of me, as it would mean that the band is willfully toning down their incredibly energetic barrage of tech-death, they end up working out very well.

While I think Omnipresent is an excellent album on its own, I think it is missing a couple of things for it to be able to topple Entity from its iron throne. The biggest nit-pick I have is that while the music is very well maintained and organized, I do miss the destructive and turbulent nature that was packed into Entity. There aren’t any tracks that match the intensity I feel on songs like “Explusion of Fury”, “Saligia”, or “Committed”, but I do realize that is an incredibly tall order that I have given.  Second, although you can hear Mike Flores‘ hypnotic bass skills at some points during the album, I think he is buried pretty deep in the mix, which is an absolute shame (at least Mike‘s guttural vocals make a return, so that’s a plus).

Omnipresent was easily one of my most anticipated albums of 2014, and the three-year wait was certainly worth it.  What we have here is another true Origin record that is able to stand on its own two feet and pummel you with the kind of brutal tech-death that only these musical wizards can produce.  While it doesn’t quite measure up to the genius of Entity, these twelve tracks will be more than enough to satiate your Origin-driven hunger until their next opus is bestowed upon us.