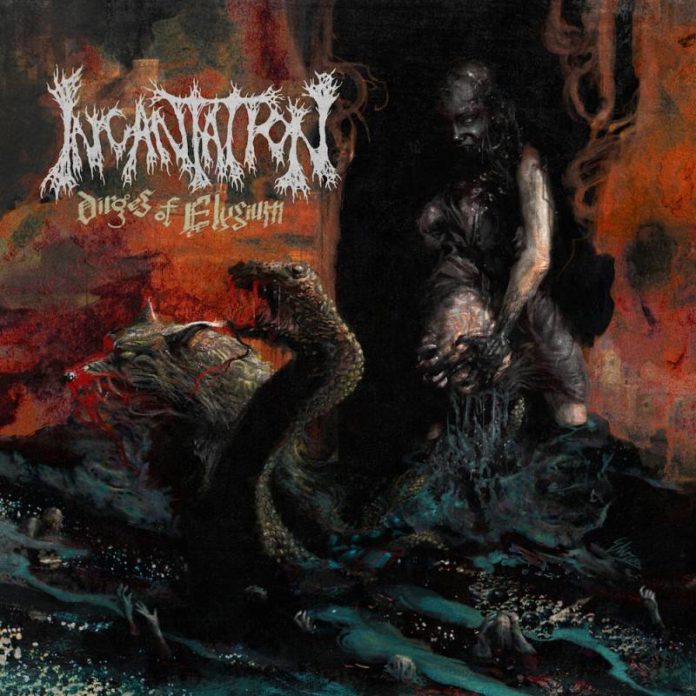 In the early days of death metal, the scene was split between several regional scenes, but none as brutal as the one in New York, with Immolation, Suffocation, and Incantion paving the way. They played some of the heaviest death metal, and helped bring the breakdown (albeit in a somewhat different form) into the metal world. Incantation in particular had a crushing sound that would go from fast and thrashy to glacially paced doom riffs, and has been led by guitarist/front-man John McEntee since 1989.

Dirges of Elysium is Incantation’s 9th full length LP, and the fourth to have John McEntee on lead vocals, a role he has filled by virtue of being the sole original member.  John’s riffs have always been distinctive, and have given Incantation their signature sound; whether it’s blinding speed or monolithic and slow, you know exactly who you’re listening to. “Dirges of Elysium” serves as a slow, death/doom intro to some of the most infernal death metal tunes released this year; followed quickly by the speedy “Debauchery,” the one-two punch of slow and fast is classic Incantation, a formula that has stayed relatively unchanged over the last couple of decades. “From a Glaciate Womb” is a slow track that rivals anything put out by the death/doom bands that started around the same time as Incantation; the emphasis is on death, of course, but there’s still enough melody there that would have Paradise Lost (circa Lost Paradise) nodding their head in approval, and is a real stand-out track. Kyle Severn (drums) and Chuck Sherwood (bass) do an excellent job holding the songs together when transitioning to time changes, and should be commended for it; a good rhythm section can make or break a band, and they’ve made a killer combo. John has really come into his own as a vocalist over the last few albums, and Dirges of Elysium sees him in top form; he sounds just as comfortable on the slow pieces as he does on speedier songs, like “Impalement of Divinity.” His highs aren’t the strongest, but he doesn’t really go into those very often, preferring to stick to the standard guttural growls that previous vocalists in Incantation have employed.

The sound on this album is captured immaculately by Bill Korecky, who has worked with Incantation as producer and engineer for a number of years now. There is a lot more doom present on Dirges of Elysium than previous efforts, so a solid low-end is an absolute necessity to capture the heaviness; I’m glad to say this is delivered in spades. The guitars and bass sound absolutely massive, keeping your attention even through songs like “Elysium (Eternity is Nigh),” which is easily one of the longest songs they’ve ever written, clocking in at nearly sixteen and a half minutes. The unholy atmosphere is captured skillfully by Mr. Korecky; the overdubbed guitars are mixed in seamlessly, the drums aren’t overly bassy (which can really muddy a mix up), and the vocals have a slight reverb to them, which adds to the ferocity.

The truth is that there really isn’t a weak point on this record; the song-writing is as solid as ever, the production captures the power of a band that’s been around the block and is still killing it, and even the cover art is suitably dark. If you aren’t familiar with Incantation’s brand of demonic death metal, prepare yourself for a shock to the system; they may not be the youngest or newest band to hit the scene, but you’ll quickly learn that their sonic-assault has lost none of its potency. Incantation may have one of the most appropriate band names, as well as one of the most appropriately named albums with Dirges of Elysium, as the music contained within truly sounds like dark hymnals and invocations dedicated to the Dark Lord. The coming apocalypse has never had such a good soundtrack as this, so throw your horns up!