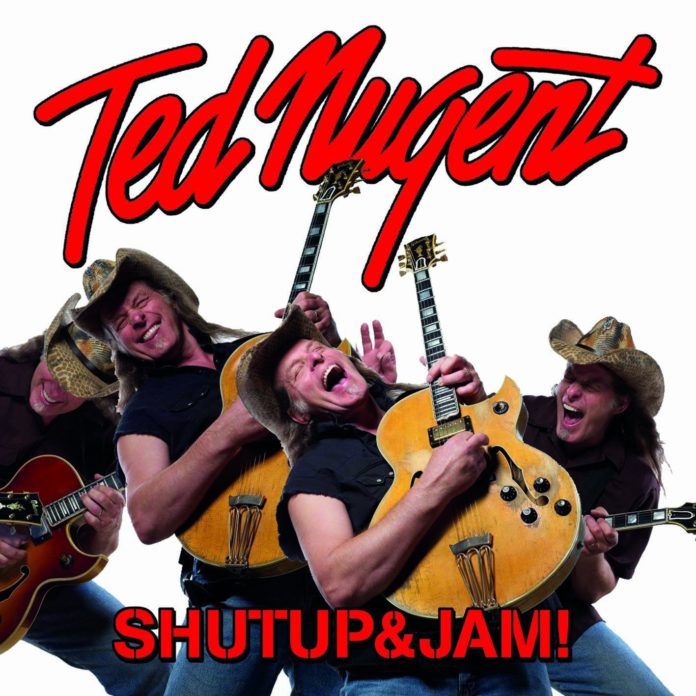 Of all the things I ever thought I’d review for Metal Blast, Ted Nugent was never on the list. For starters, I thought that he was too busy acting as the GOP’s cymbal monkey to actually record anything, especially considering his schedule of concerts and speaking engagements where he threatens Obama, Hillary Clinton or anybody that disagrees with him.

You see, Ted Nugent is a fucking idiot; granted, an idiot savant with remarkable guitar skills, but an idiot nonetheless. Although still remembered for his hits “Cat Scratch Fever” and “Wango Tango”, as well as his truly relentless touring career (the man has played more than 6,000 gigs), nowadays Nugent’s name is not really mentioned because of his musical prowess, but rather because of the absolutely insane shit he keeps saying, and which has found him a niche in the most jingoist parts of America, as well as making him the musical patron saint of Fox News and the Tea Party.

Considering what I thought about this man, I approached the album with caution. You know, the kind of caution Ted uses before he illegally hunts bears in Alaska in a futile attempt to compensate for his sexual inadequacies. I felt that it was important to be just and impartial regarding this release, even if I strongly disliked the man; perhaps almost as much as he dislikes animal-rights protesters, who he thinks should get an arrow through their lungs.

Shut up and Jam!, the title of Nugent’s new album, and a piece of advice I wish he’d follow, can be divided in two parts, the music and the lyrics. While this division is hardly unique (you can, after all, divide any album in music and lyrics) in the case of Nugent it becomes a necessity. While the musical part of the album is, for the most part, above average, Teddy’s lyrics are painful, and the kind of crap that would be funny if it wasn’t because we know that he is serious.

Millionaire Ted Nugent likes to paint himself as the guy next door, a no-nonsense truck-driving ‘merican who tells it like it is. In stark contrast with the Ted Bundy-esque clean-cut image of his friend Sean Hannity, Nugent pretends he is the kind of guy you’d run into at your local Walmart as you buy a shovel to bury the pedestrian you ran over during your latest drunken stupor. Take “I Love My BBQ”, for instance, a song so stupid it’s hard to believe he actually dared to put it on the record; the music sounds just like it was made for a commercial, and the lyrics are just fucking dumb, with Ted implying avocados are African and that Canadians are all about tofu (dem lefties are all vegans, am I rite guys?) and, in his constant desire to remain in the wrong side of history, calling Polish people “Polacks”.

Draft-dodger Ted Nugent also deserves credit for the amazing cognitive dissonance he displays both in his lyrics and in his life when it comes to the military. It would be one thing if this subhuman imbecile had simply not served in the military, and yet praised it; but since he dodged the draft by getting coked up enough to shit his pants (although he later recanted that story, saying he enrolled into college in order to dodge it) it is really shameful to see any kind of military chest-thumping coming from him. Of course, this doesn’t stop him. Songs like “Semper Fi” and “I Still Believe” are all about how great the boys in uniform are; you know, the guys fighting wars of aggression, torturing prisoners and bombing civilians, and who Ted loves so much,that he rather shit himself and risk an OD before joining them.

Politics aside, there are plenty of musical nuggets here. “Shut up and Jam!”, “I Still Believe” and “Screaming Eagles” are excellent hard rock tunes; they’re catchy, they’re powerful and fun as hell. The Southern inclination of Detroit-born Ted Nugent also manifests itself in the clear bluesy sound of “Everything Matters”, which is quite refreshing in an otherwise hard-rock album. As for bizarre inclusions (the atrocious “I Love My BBQ” aside) “Never Stop Believing” (with a melody reminiscent of “Crying” by Aerosmith) appears as a very radio-friendly tune, that I would not be surprised to see doing very well in the charts; it has just the right amount of heaviness to make imbeciles feel like rockers, while packing enough pop to do well in the pop charts. Sammy Hagar lends his vocals to “She’s Gone”, a song about political commentator Ted Nugent’s hooker girlfriend, in what ends up being an unremarkable and repetitive tune.

Ted Nugent is a remarkable character. He somehow makes me, a person that strongly dislikes the Obama administration and who is pro gun rights, side with the left on almost everything he says. Shut Up and Jam! is an album that is permeated by Ted Nugent’s idiocy, to a degree that his good, yet unremarkable, music cannot overcome. Although fun to listen to (as long as you’re not paying attention to what he’s saying) this album packs the kind of music you’ll hear as the soundtrack for a summer blockbuster movie; Entertaining? sure. Memorable? Not a chance.