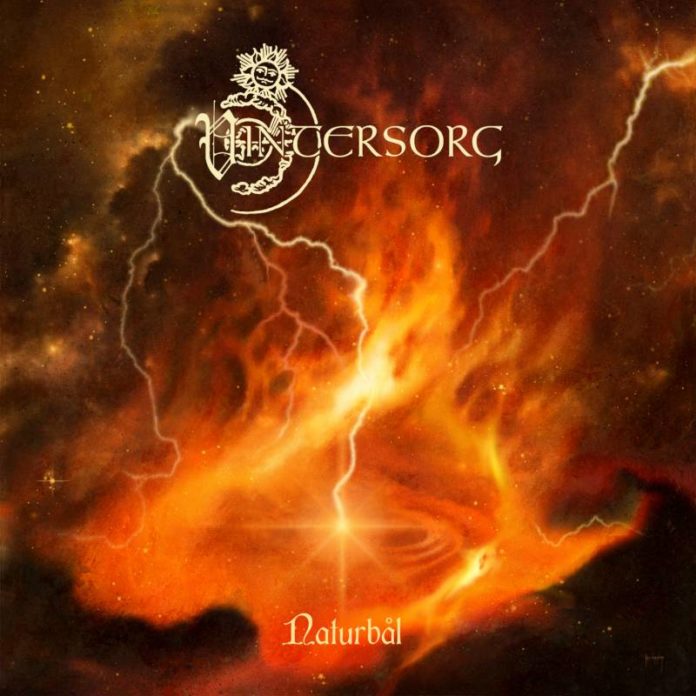 Diversity has always been the name of the game when it comes to folk metal, and one band that truly lives up to that standard is Sweden’s Vintersorg. In their music, you can find elements of black metal, progressive rock, symphonic metal, a little bit of power metal, and melodies that are inspired by traditional folk themes. Originally formed as Vargatron in 1994, the idea was to push the boundaries of black metal with mostly clean singing and more melodies; the band split in 1996, but vocalist Andreas Hedlund continued on, taking the name Vintersorg both as a stage name and as the new band name.

Naturbål comes just in time for Vintersorg to celebrate 20 years, and marks the 9th full length LP for the band. If you’ve never heard the band before, the first track, “Ur aska och sot,” provides an excellent crash-course; lead guitar and keys begin with a folk/medieval style melody, which is quickly blasted into oblivion by shrieked vocals and a fast black metal attack. What sets the band apart from the rest of the pack of folk-inspired black metal bands, though, is the clean singing; the harsh vocals are done extremely well, but the clean vocals are really powerful and confident sounding. Mr. V (another pseudonym for Andreas) sings like a young god, and could have easily fronted any number of power metal bands that cropped up around him in Sweden; thankfully for Vintersorg fans, though, he chose to go off the beaten path, and mixes different styles of singing to compliment the different styles of metal played in his band. “En blixt från klar himmel” has a dark black metal feel, though there’s plenty of keyboard and melody; I’m reminded of bands like Borknagar and Moonsorrow, as the sense of melody between these bands and Vintersorg is very similar, as well as the approach to incorporating different styles of metal into a black metal setting. Acoustic passages give way to tremolo picked electric guitar, keyboards swirling over it all with symphonic melodies, layered vocals, and drums (though they’re programmed) always timed just right. “Rymdens brinnande öar” features guest vocals by Frida Eurenius of Lapis Lazuli fame, perfectly complementing Mr. V’s singing; both have a wide range, and impeccable sense of melody. What I’m most impressed by is how heavy things can get, and yet still keep a very strong melodic edge, “Elddraken” (my personal favorite) being a great example of this; the black metal is fast and intense, but when the music shifts to a more power metal feel, you still want to bang your head (even in the harpsichord sections!).

The sound is all very clear on Naturbål, which is fortunate, because there is a lot to take in at once; layers upon layers of sound, and yet it doesn’t come off as cluttered. At times, though, the vocals are just a little too squeaky clean, to the point they almost sound processed by, *gulp,* a vocoder. Still, the mix isn’t too heavy-handed with the modern technology; where a clean production might mean lifeless and plastic sounding music for many bands, in Vintersorg’s case there’s really no other way the songs would be done justice to. The over-dubbed vocals have such tightly knit harmonies, I imagine trying to take the material live would be a bit of a daunting task, though I’m sure Vintersorg are more than up for the challenge.

Although it might sound like a cliché, Naturbål has something for everybody. Fans of power metal, black metal, Viking metal, progressive rock, and everything in between will truly find something to like in each and every track presented here. If you don’t like harsh vocals, the clean singing will be perfect, and if you like more aggression, the shrieks will satisfy you. This is truly a remarkable album, and will leave many fans hungry to see this material in a live setting.