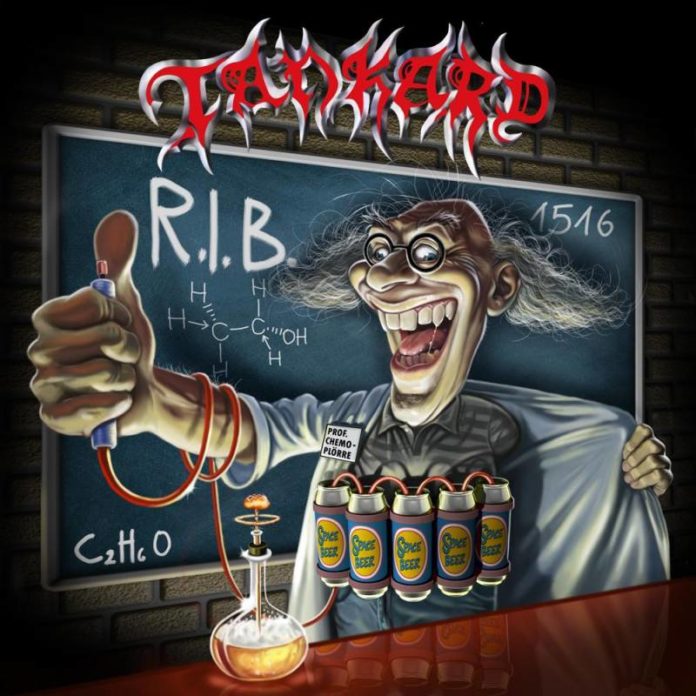 Tankard, the Anthrax of the Teutonic big four. That’s a comparison that I’ve heard a few places before and I feel that it’s an apt one. Both bands have a unique sense of humour that they never shy away from; both create biting pieces of social commentary when the mood strikes; and, finally, both are making some of the best music of their careers right here in the 21st century. While I have overlooked Tankard at times in the past, I have been consistently impressed with what I’ve heard of their new material. R.I.B. (or Rest in Beer) is no exception.

Album opener “War Cry” is excellent (ignoring the throwaway 35-second intro) and shows immediately that Gerre‘s voice is a fine vintage that seems to improve with age. If you listen to Tankard’s early albums, he sounds quite lean and fairly punky; here, as well as in the last few albums, his voice has become this full, barrel-chested roar, like he’s throwing his whole body into his delivery. As a vocalist, it’s an incredible thing to hear. and it really pushes fairly typical thrash attacks like “No One Hit Wonder” and the title track into the realm of excellence.

Production-wise, R.I.B. sounds professional, crisp, and clear. There is nothing WRONG with Michael Mainx‘s tones and textures, but there’s also nothing resoundingly right or interesting about them either. A unique and interesting production could have made an overall more interesting record for Tankard. As it stands, and despite the aforementioned quality performance put forth by Gerre, as well as the tight performances all around, R.I.B. ends up sounding like a great thrash album you’ve heard a dozen times before.

A more interesting production would have added some real magic to the already stellar riffing of Andy Gutjahr, who has laid down some seriously entertaining stuff here. The monstrous groove that permeates “Breakfast for Champions” rivals some of the best work from latter day Sodom records, and the balls-out mayhem of “Clockwise to Deadline” is sheer pit fuel. Of course he’s supported by a rhythm section that’s tighter than a nun’s asshole. That’s not to say that Frank Thorwath and Olaf Zissel are playing anything out of the ordinary, because they’re not. They’re simply a tight, precise, and uncompromising rhythmic force, driving home every single groove and forcing the listener’s attention to the front. This is what the best rhythm sections in thrash do: lay back and hammer home.

While it ends up being more of the same straight-ahead Bay Area-meets-Accept stylings we’ve always gotten from Tankard, R.I.B. nonetheless succeeds in being one of the most entertaining entries in their discography. The Teutonic Big Four (i.e. Kreator, Destruction, Sodom and Tankard) have been consistently outperforming their American counterparts over the last 20 years. No one can say that Tankard have spoiled that streak in the least.