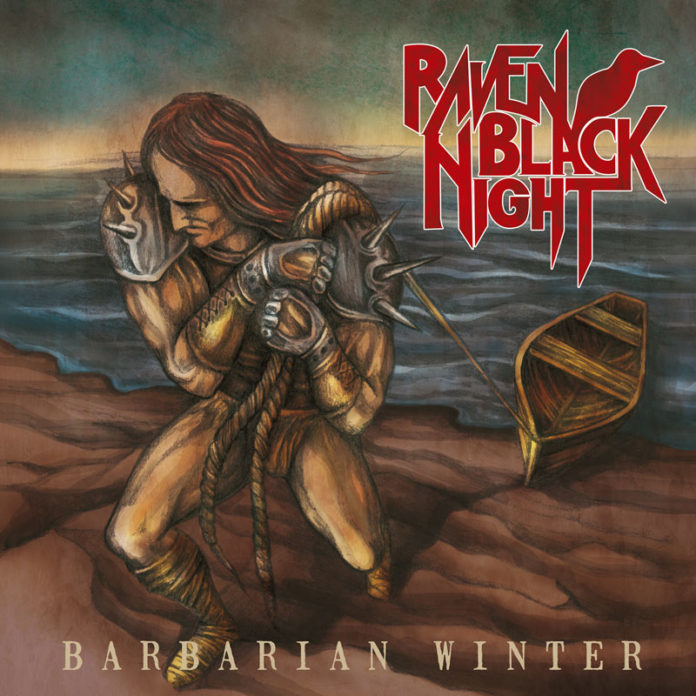 It is a solid fact that Doom Metal was the first metal genre ever, pioneered by Black Sabbath all those years ago. Nowadays, this genre doesn’t seem to receive as much respect as it ought to. Whether because of its natural tendency to remain underground or something completely different, very few new bands are caught in the mainstream eye.  Raven Black Night, one such band, is an Australian doom metal ensemble founded back in 1999. After releasing an LP and tree demos, they signed a deal with Metal Blade Records. Barbarian Winter is their first opus to be released under the label, and is about to show the world what these guys are capable of.

The album itself is based on a traditional Doom Metal feel with a lot of early Heavy Metal elements. The songs vary from slow, classic Doom pieces to mid-tempo gallops, in the vein of early Candlemass. The guitars take the best of both worlds, and feature both heavy and great Rock and Roll riffs and slow, emotional solos as well as some incredible shreds. The vocals fit into this variable mix as well, with typical Doom Metal wails, high screams and even growls. Jim the White Knight, responsible for the clean vocal duties as well as the guitar, has a neat 70’s quality to his voice, although he tries to resemble Messiah Marcolin too often. Unfortunately this means neglecting the other side of his vocal abilities, demonstrated in Black Sabbath cover of “Changes,” sung with amazing technique and emotion that the White Knight sounds almost like Bruce Dickinson. One other thing is that the album starts off a bit weak, compared to the ending. Some of the best tracks are featured towards the end of the album, such as “Lips of Desire,” “Angel with a Broken Wing” or the amazing title track. The weakest point of the album has got to be the production. Although it sometimes fits very nicely, like in “Nocturnal Birth,” the overwhelming low tones and vocals that sound as if they had been recorded a mile away from the microphone have ruined my impression of the album for the most of its duration, especially at the very beginning.

All in all, this is a solid record following in the footsteps of the giants of this genre. The strong 70’s feel is definitely a big plus and the album features great guitar work and vocals, although the production could have been a lot better and still possess the old-school quality. Still, this record manages to get inside my skin the more I listen to it, and I think Barbarian Winter is a great way for the band to introduce their sound to the world.