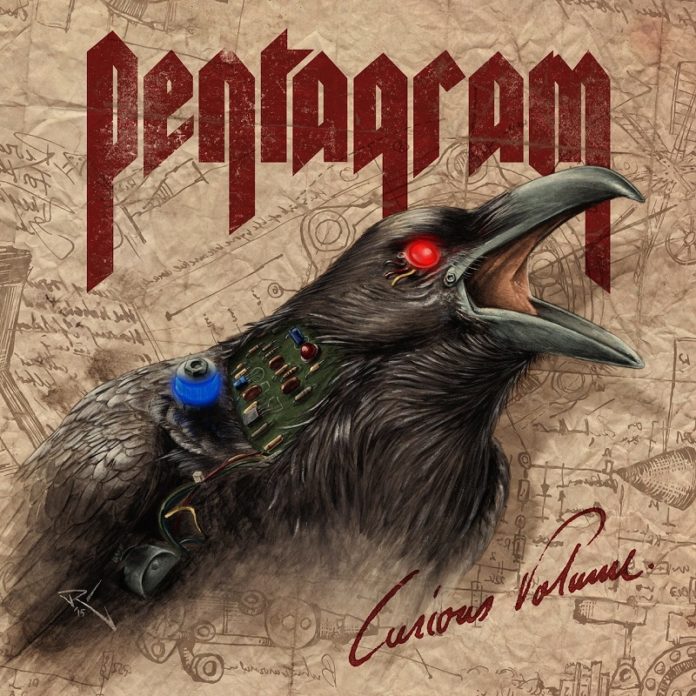 Going as far back as December of 1971, Pentagram have been trailblazers in heavy metal and (to a greater extent) the doom metal sub-genre, yet were nearly doomed to be an obscure footnote in the metal underground. Though their early demos were well received by fans of this new brand of high volume hard rock, Pentagram were plagued by a revolving cast of musicians, as well vocalist/sole constant member Bobby Liebling’s well-documented battle with drugs. Bobby wrote dozens of songs in the early years of Pentagram, many of which have been re-recorded and used on every major release, starting with 1985’s self-titled debut, Pentagram (later re-released as Relentless).

Curious Volume marks Pentagram’s return to Peaceville Records, and the band’s follow up to 2011’s Last Rites. Having made a seemingly miraculous return from the dead (thanks in no small part to the documentary Last Days Here about Bobby Liebling‘s struggle with addiction) expectations for Pentagram’s releases are pretty high. I’m pleased to say that, for the most part, Curious Volume lives up to those expectations.

As is the case with most of their releases, the band put forth a mix of new material with a handful of older tunes; in this record, however, the consistency in the songwriting over the years really shines through. While “Lay Down and Die,” “Earth Flight,” and “Sufferin” were all penned by Bobby back in the 70’s, “Misunderstood” in the 80’s, and “Because I Made It” in the 90’s, there’s a uniformity in tone and attitude. If you didn’t have the liner notes in front of you, I highly doubt you’d be able to tell which song comes from which decade, which is a truly remarkable feat, and the hallmark of excellent song-crafting.

Vocally, Bobby Liebling sounds invigorated by the new material, and though his vocals have never exactly been the most tuneful, you have to admire the man’s energy. Liebling can certainly carry a tune, but only barely; his strength lies instead in his ability to match the attitude needed for each track. For more uptempo hard rock anthems like “The Tempter Push” the vocals are fairly barked out, while slower, lurching doom numbers like “The Devil’s Playground” feature a deeper, more emotive tone. The only real miscue here is the punky “Misunderstood,” which features some nasally vocals in the chorus that border on irritating; and yet, even then it’s still a catchy song, and has some excellent guitar work. One section that really stands out is the last 20 or so seconds of “Earth Flight,” which feature a choir of psychedelic rock-influenced vocals that would fit right in with an early Jefferson Airplane tune.

Another drawing point for Curious Volume is the welcome return of fan-favorite axe-slinger, Victor Griffin, who was featured on many of Pentagram’s best albums, including Relentless and Day Of Reckoning. Everything that you could possibly hope from Mr. Griffin is here: Tony Iommi-esque stoner riffs, blazing solos, and a little bit of punk attitude. The songs aren’t overly complicated, tending to stick to a formula that is tried and true, but if it ain’t broke, don’t fix it, right?

Pentagram have turned in a pretty solid effort with Curious Volume, and I dare say that the three 70’s tunes and the title track can be considered instant classics. The formulaic nature of the songwriting might not gain the band many new fans, but the die-hards will certainly find much to enjoy here. The faster tunes aren’t as strong as the more doom-oriented songs, but still manage to rock harder than many of the newer bands that are riding the new wave of “retro-metal.” I can definitely foresee many repeated listens to Curious Volume, with very little in the way of track skipping.

IN A NUTSHELL
A great mix of new and old style metal that is sure to please long-time fans.
POSITIVES
A release that shows a cult band at the top of their game.
NEGATIVES
Formulaic songwriting; Bobby's nasal voice in "Misunderstood"
4.5

Carach Angren – This Is No Fairytale