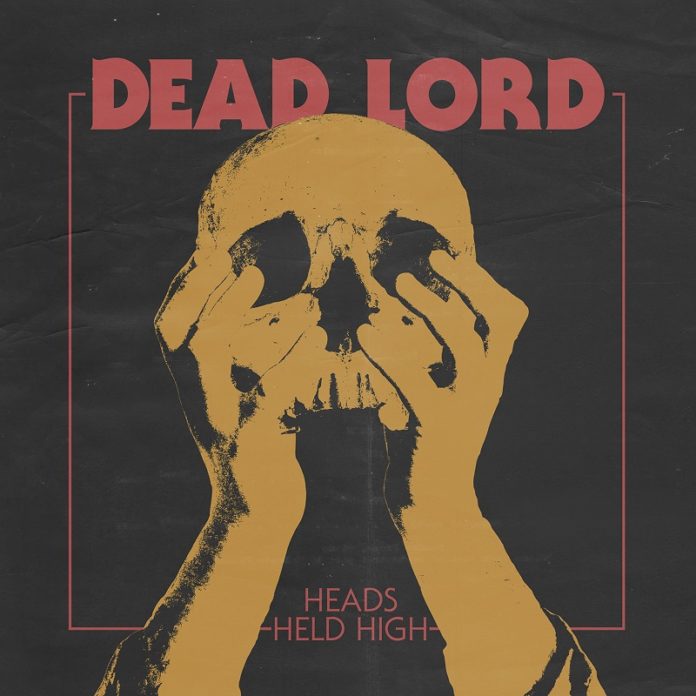 Heads Held High begins with a song titled “Farewell” which I assume is supposed to be ironic. The song almost lives up to its name, as its sound is very basic with lyricism that is extremely minimal, to the point that there are approximately three words that are memorable. Fortunately, things pick up after the intro and some intrigue begins to develop as the band slips some complexity into their sound and ups their lyrical game. Dead Lord present an oddly mixed bag of music and playstyles, sometimes sounding like a hybrid of AC/DC and Black Sabbath, and other taking on an alternative rock feel similar to The Strokes.

While a broad range could potentially result in a jumbled mess of a performance, it is the bands minimalistic approach to their music that keeps everything in line. The sound never goes careening off the rails into strange new lands; instead it is corralled into a tight single file line with a clear destination in mind. While keeping the sound disciplined does have its perks, it can also keep things from tripping into mind-blowing concepts which gives off the feeling that the band wanted to play it safe. For a well-established band, playing what you and the fans know is an acceptable course of action, however with a relatively new act like Dead Lord, taking risks in the hopes of carving out something incredible could be a much wiser course of action.

As a “desert rock” band (although they’ve also been slapped with the very overused label of “stoner”), the atmosphere of Heads Held High does feel like an old western showdown between the sheriff and the leader of the local gang of hoodlums. The establishment of the consistent tone and themes further demonstrate that Dead Lord have a solid grip on how to develop their sound and drive it to the goal they set for themselves.

Heads Held High displays playstyles and techniques from a shockingly wide pool of inspiration while keeping everything in check with an high level of discipline. There are themes and ideas that are developed to their logical endpoint, but never seem to go any further as a result of Dead Lord always opting for the safe path they had already planned out for themselves. While, overall, the album is a mature effort, it could have definitely benefited from some immaturity and fun to add a little spice and flavour.

This reviewer missed out on the most obvious influence of Thin Lizzy. If you’re not a fan or don’t know who they were then your opinion has no bearing on me.

Hi Alexander, thank you for stopping by.
I assure you, there are very few human beings over the age of 18 who don’t know who Thin Lizzy were.