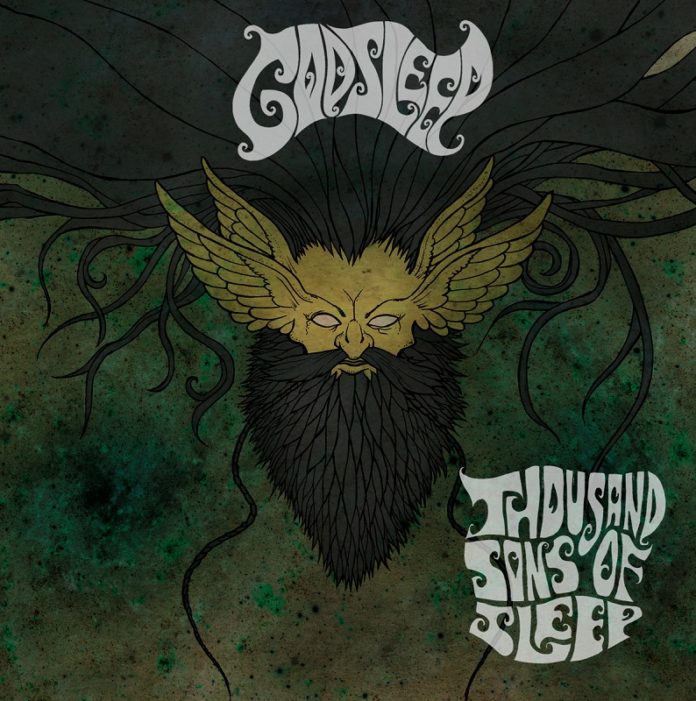 For a band with ‘Sleep’ pushed so heavily in their name and album title, this Greek outfit doesn’t seem to have too many qualities in common with the American stoner metal Sleep. However, since the qualities they do share are those of heaviness, strong bass presence, and a way with riffs, there’s enough commonality to get them a pass from all but the most uptight stoner metal aficionados (of which there always seem to be more than expected).

Setting aside the name game to judge the band on its own merits, there’s a nice mixture of styles housed in this debut.  They’ve got the heaviness, but with enough treble from the guitar to keep it from getting completely submerged in swampiness (though they do take occasional bass-propelled dives to satisfy the section of their audience craving just that).  In each song Godsleep slide around on the boundaries between metal and rock, heavy psych and flat-out stoner, keeping the fusion bubbling with inventive touches while playing to the usual touch-stones of their influences and, by and large, they do it well.

On the side of possible complaints, while the songs do a good job with stirring things together, they rarely go out on really surprising tangents.  That may be good news to those looking for an album to blast at high volume while jamming out, but it does keep things a little predictable; this is particularly so when the inclusion of some other traditions from their inspirations (say, a long wailing feedback exit, quick horror movie sample, substantial drum solo, or even just a few stretches of wild shred for more than five seconds) could have helped add a little spark and flash.  “Wrong Turn” is a good example of what Godsleep can pull off when they deviate from the usual structures somewhat, with a nice blistering tear at the end (before a standard stomp-out closes it); the unified build-up of “Home” is another high-point, although, just like “Wrong Turn”, they have the bittersweet talent of showing you how much further the band could go.  Kind of like Sinister Haze‘s starter EP, if you want a direct comparison.

The above aside, Thousand Sons of Sleep is an effectively solid and warmly earthy album.  Taken as the debut that it is, Godsleep deserve some genuine respect, particularly for how lively they keep their momentum while plowing up old bones.  They’ve got room to grow, and the fun to be had with this set of songs points the way to some real head-turners in their future.  The songs will almost certainly do well in live performances, as they hold plenty of riff-shifts practically begging for some improvisational expansion. Stoner metal fans looking for something with some light twists should get some pleasure out of it, and it might even win over some ears unfamiliar with the genre.  Good stuff, just a little under-developed (so far).

IN A NUTSHELL
If you're a fan of the genre, give it a few plays to grow on you; if not (and if you've got an open mind), try it in full at least once to see how well it sticks in your memory for the next few days.
POSITIVES
Good combination of stoner/psych rock/metal, not too slavishly devoted
NEGATIVES
Not much that won't already be familiar to those who know the style
4