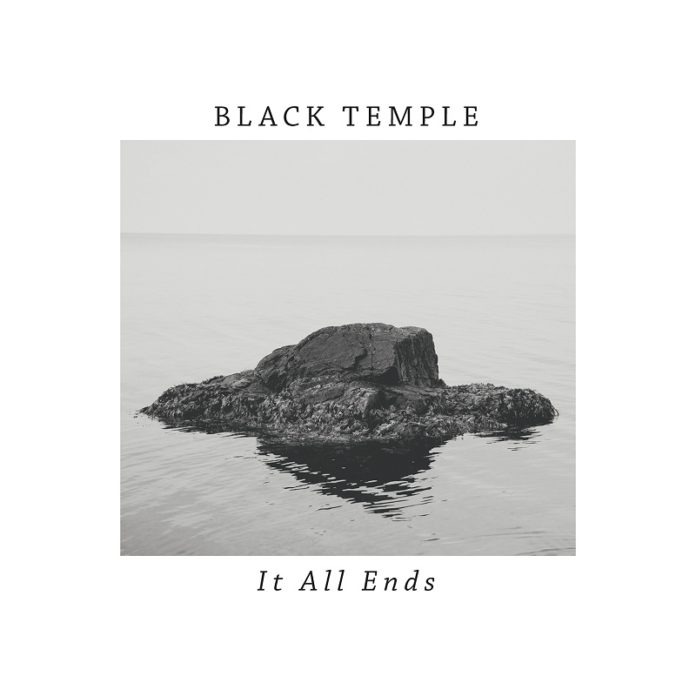 In the year 2010, the band known as Odyssey cast off the title they shared with an American disco act and became Black Temple… a name shared with a techno metal performer. They hoped to breathe new life into their performance by smoothing out their once primitive and aggressive style with melodic touches. Such a dramatic switch can lead to catastrophic results and potential fan backlash from those who may claim the band has “sold out, man.” On the other hand, it can expand the band’s horizons and possibly add the spark and flair they had been looking for. Black Temple unfortunately falls into the former.

Conceptually, It All Ends is a very confusing album. The album sounds like early 2000’s punk with its low production values and angst driven lyrics, but there are also core and doom elements splashed here and there in the tempo and breakdowns. I am all for strange and unusual elements being jammed together to make something unique, but this only works when healthy doses of logic and understanding are applied to the development. Black Temple forget both key ingredients, resulting in a performance that is disjointed and not cohesive.

Instrumentally, there are some bright points, particularly in the intros that tend to come bursting out of the gate. The big issue is that the energy does not carry into the rest of the music and quickly fizzles into a slow, plodding performance. It’s like when the idea for a really good story strikes an aspiring writer, but they can’t bring themselves to write more than the beginning.

The songs do avoid dragging on, but that can be attributed to their short run times, with the majority clocking in just over 3 minutes, leaving the listener just enough time to scratch their heads and wonder what the hell did they just listen to. This leads to the crux of the album’s problems; the whole thing is incomprehensible and uninspired in its design and construction. For a band that claims to play “as if every note was the very last,” their music lacks the substance and power that one would expect from a bold statement like that.

The final layer of icing on the under baked cake is how the band manages to have very little variation and yet still creates a sound that doesn’t flow well. The moments of high energy noise cut in with the slow rambling sections simply feel like puzzle pieces that neither fit together nor belong to the same puzzle.

It All Ends has some shining moments that raise expectations and bring glimmers of hope; however, these moments are quickly buried under a landslide of lazy ideas and uninspired playing that leave the listener confused and flabbergasted as to what is invading their ear drums. For those looking for a performance that is properly developed and brought to life, this is one to skip.

IN A NUTSHELL
A combination of aggressive and melodic styles that doesn't bring either side forward.
POSITIVES
Some instrumental highlights.
It all ends, eventually.
NEGATIVES
Uninspired design and construction.
Confusing to listen to, but not out of complexity.
1.5