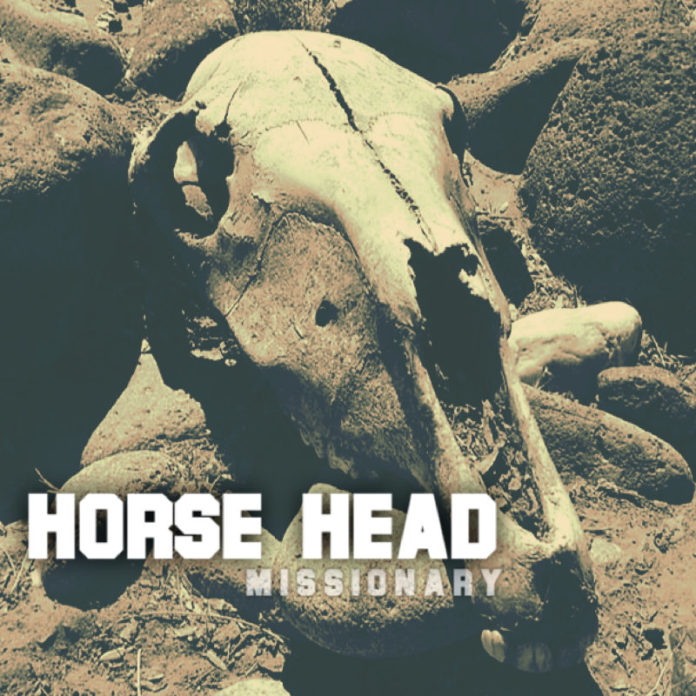 Missionary makes for Horse Head‘s first release since their self-titled demo (which came out about two years ago). With four tracks to match their four years of Arizonan existence, it doesn’t seem too unreasonable to expect that what they have here is a set of appetizers prepared just the way the band wants them.  Their professed blending of sludge and doom is expressed in an interesting way, cutting thick swathes of bass with the sharper and rawer guitar as the drummer goes for hard blisters of knotty beats.  They also have enough going on with the songwriting that they can confidently have the vocals (mainly growls and hissing yells) take a breather while the music goes nasty with break-downs and stormy bursts.

Horse Head have the piercing feedback pulls of sludge, death metal’s vigorous shredding, and the bass undertow of doom stitched together with few gaps or awkward fusings.  As it is usual with sludge, unless you’re damn well-versed with the specific vocalist’s delivery style (or happen to have a lyric sheet), it’s going to be primarily guess-work as to what the actual words he’s spewing happen to be, but assuming that they are about something violent seems like a safe-hedged bet.  Then again, they could be pulling some goofiness from the jokier grindcore bands and howling about cupcakes for all I know.

Whatever the vocals are meant to communicate, they’re fitted in an effective way to the rest of the music, and there are times where Horse Head get almost Acid Bath-y in their sink-and-punch handling of mean and heavy rhythms.  About the only thing I’d have as an negative is that they also have points where they seem somewhat unfocused, but the ambiguity there provides some cool contrast to the clearer stomps.