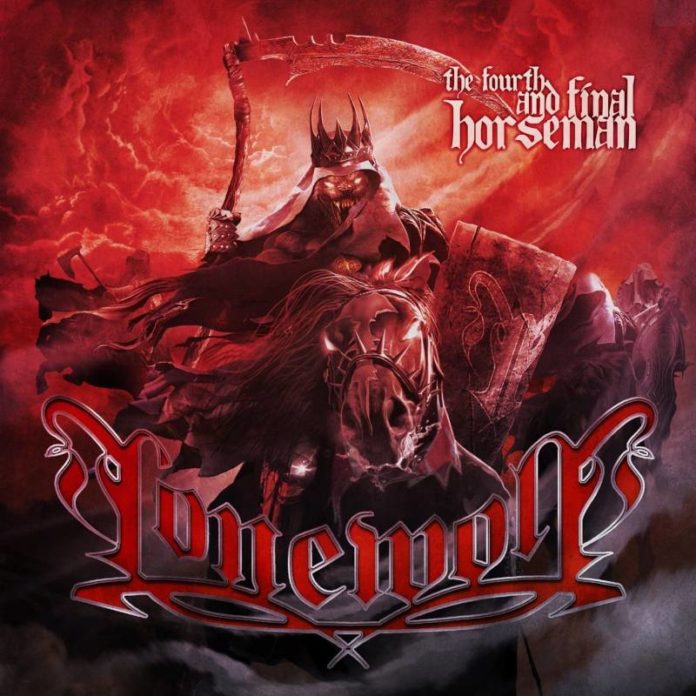 The 1980s is and will forever be the most fertile time from which metallic influence springs. Heavy Metal was seemingly omnipresent and hundreds upon hundreds of great albums sprung not only from the depths of the underground but from the mainstream as well. Though France’s Lonewolf formed in the famously anti-metal time of 1992 (after breaking up in ’96), then reformed in 2000, it’s not hard to see that their steel hearts were forged in that golden-era.

The Fourth and Final Horseman is the bands 6th album overall. Despite its being released in 2013, it would not be hard to mistake this for a well-produced German (or middle-American) indie circa 1985. Its vibe is certainly epic in nature, all sword-slashing and blood-letting like early Grave Digger or Stormwitch doing battle with Omen. It’s a really refreshing album to hear in the middle of the current “New Wave of Traditional Heavy Metal”, as most of the acts one could include in that scene are playing either squeaky clean, high register Maiden-isms or down ‘n dirty proto-thrash. In both cases, the roots lay in the NWOBHM and its nice to hear a rougher, darker, more mainland European form of traditional in the middle of this early 80s renaissance.

This even has that Germanic sense of vocal-structures, the entire band seemingly getting in on things come chorus-time, making it hard for the listener to not shout along ((even on a public bus… it almost happened…)). Jens Börner‘s voice is actually very similar to Grave Digger’s Chris Boltendahl, a deep shout that is only slightly smoother than that man’s gravelly rasp. If you’re looking for chest-thumping battle-cries from your traditional metal, this is a good place to find them.

Every instrument is right on point also, with lead work that recalls early Stormwitch and a rhythm section that rocks, grooves and has no-shortage of shining moments. If one complaint can be levied against the album it’s that the production, while solid, isn’t ideal for this kind of material. Those aforementioned choruses would really benefit from a bit more volume, as would the leads. Actually, bringing the rhythm guitar and the snare drum down ever so slightly would have opened the sound up immensely. It would get the vocals popping and make the leads really soar.

Though occasionally functioning at high velocities, and also having epic structures, calling this anything other than traditional, 80s-styled Euro-metal would simply be wrong. This is certainly the kind of thing that the early power metal bands would have been listening to around their formations in the late-80s and early 90s ((well… this and Maiden)) and I have no doubt that, if bands like Lonewolf catch on, we’ll be ushering in a new wave of power metal in a few years’ time. The Fourth and Final Horseman has all the elements that make great, no bullshit Heavy Metal.