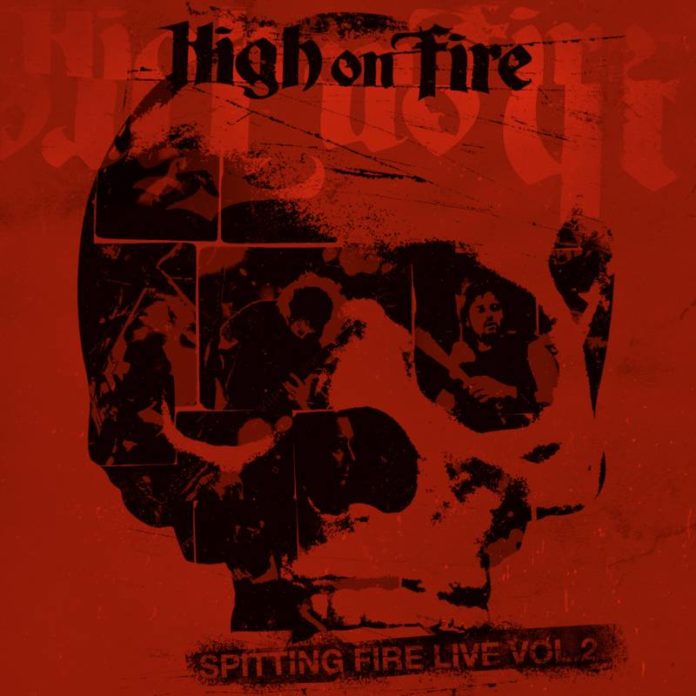 A good live album is more than just a document of a band’s performance. It should do more than just capture the instrumentation and the vocals, the crowd cheering and the banter from the band. It should capture every aspect of the performance, even those that you can’t see. You should be able to imagine the mosh pit churning underneath the band’s feet, the endless rows of banging heads and raised horns saluting the band’s glory, every bead of sweat flung from the heads of the musicians as they unleash hell itself. And above all, you should be left with the thought “Fuck, I wish I was there.”

Spitting Fire Live Vol. 1 & 2 is the record of two High on Fire shows in New York City, recorded in December of 2012. I was at one of them and had an absolute blast, and this album is an excellent audio record of how it all went down. There’s Des Kensel’s relentless drumbeats, so numerous and pulverizing that they could easily have trampled Mufasa underfoot. There’s a massive low-end tone from Jeff Matz that lends a necessary weight to the recordings. And Matt Pike, in both vocal ability and shreditude, sounds better than ever now that he’s gone sober. This is a live document of one of the strongest and tightest power trios in modern metal doing exactly what they do best. But it’s really only necessary for the hardcore fan to own.

The best part of seeing High on Fire live isn’t just the monstrous powerhouse mix of Celtic Frost and Motorhead that they’re able to unleash. It’s seeing the chemistry of the band on full display as they put all their effort into rocking out as hard as possible. There’s no way for the listener to see the goofy faces and snaggletoothed grins that Pike pulls in the middle of a particularly vicious solo. There’s no way for them to marvel at the rapid-fire way Kensel unleashes his remorseless artillery barrage (it’s heard well enough, but the mix could be better). And there’s no way for them to see Jeff Matz headbanging and skulking around the other side of the stage like a bird of prey on the prowl. The High on Fire live experience can’t be communicated through just sound alone, and there are tons of YouTube videos online that do a better job than Spitting Fire Live ever could at capturing this killer act in all their glory. And they’re free, to boot!

That’s not to say there isn’t plenty to love here. The set list is full of killer picks and deep cuts from just about every High on Fire record so far, so this serves pretty well as a “Greatest Hits” of sorts. But aside from that, there’s nothing here that will make you want to listen to these versions of the songs over their original studio incarnations. (I’d make an exception for “DII” though, because the solo on that is absolutely facemelting.) Overall, Spitting Fire Live isn’t an ideal live album, and it certainly isn’t an ideal example of these modern metal titans doing what they do best. If you’re just getting into this fantastic band, it’s far from a necessary purchase. But if you’re already a dyed-in-the-wool fanatic, it’s sure to satisfy on at least some level. Judging from my own experience, however, you’ll be left wanting much more than Spitting Fire Live has to offer.