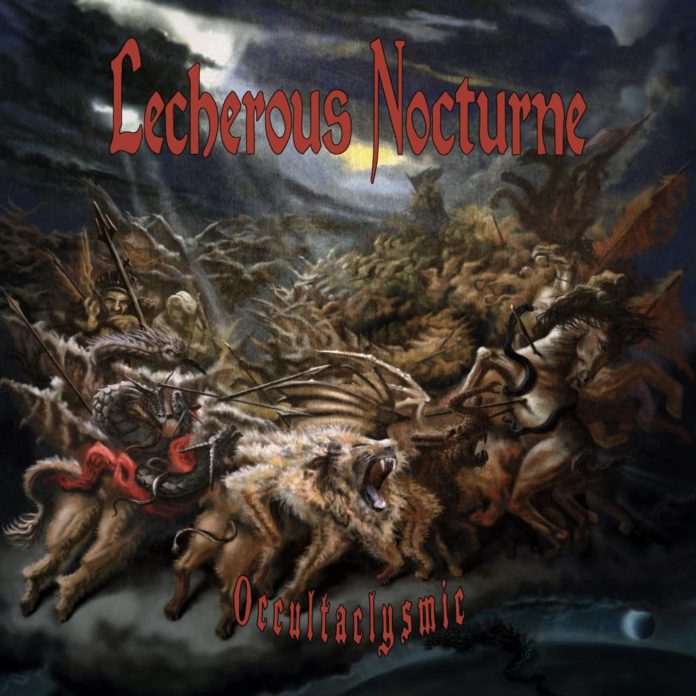 Many of the early Scandinavian black metal bands had their roots in death metal; Mayhem’s infamous Deathcrush EP is more of a death metal album than what the band would eventually go on to write. Darkthrone started out as a death metal band, and members of Emperor, Immortal, and even Burzum’s Varg Vikernes all started out in death metal outfits. To put it mildly, the inter-mingling of death and black metal isn’t something that just came out of the blue, and while death and black metal eventually came to be two distinctly different genres of heavy metal, the advent of fusion genres all but guaranteed that the two styles would intertwine again. In the case of Occultaclysmic, the latest release from South Carolina’s Lecherous Nocturne, it’s pretty difficult to say where one style ends and the other begins.

Already revered in the technical death metal scene, Lecherous Nocturne are one of those bands that like to push boundaries. Not content in rehashing old ideas, Lecherous Nocturne look to black metal for their latest set of songs. Technical death metal can come off as pretty chaotic-sounding to non-instrument playing listeners, so it’s no surprise that the unbridled audio nihilism of black metal works so well alongside it. Occultaclysmic starts off at breakneck speed, with album opener “Conquest Or Consent” blasting furiously through time changes, and splitting the difference between eerie minor chords, and blistering, brutal death metal riffs. Even when things slow down on “Conquest Or Consent” towards the end of the track, the malevolent atmosphere remains fully intact, and has a Scandinavian black metal vibe, similar to early Mayhem or Satyricon recordings. The title track, “Occultaclysmic,” is one of the more “conventional” technical death metal tracks, but gives way to a nightmarish, blackened soundscape towards the end, with some dark, minor chords giving the track a slightly more melodic edge. Midway through the album, Lecherous Nocturne treats the listener to a melodic instrumental piece called “Remembrance,” which has some classically-influenced piano, alongside the electric instruments. “Remembrance” proves to be the only moment of reprieve from the sonic onslaught, however, as the rest of the album is pretty fast and furious, with only the starting riff on “Planet of the Crossing” having a slower moment.

The production on Occultaclysmic is pretty raw and is, again, reminiscent of the early Scandinavian black metal scene. Buzzsaw guitars dominate the mix, with the vocals being a close second in the volume, with super clicky drums coming in next. As is the case with many black metal releases, the bass is almost indiscernible in the mix, though a quick glance at the liner notes will assure that Lecherous Nocturne does indeed have a bass player. There are hints of bass here and there, but Lecherous Nocturne opted for a more black metal-influenced sound on this record, which means that the low-end isn’t really the focus, like it typically is on most death metal records. This could be a dividing point for some fans, with those more acclimated to black metal shrugging the lack of low-end off, and the death metal fans wanting a meatier mix. I personally enjoy a good bass tone on a record, but can certainly appreciate what Lecherous Nocturne have done with this release. If you like your death metal with a healthy dose of grim, frostbitten black metal mixed in, this record will certainly do the trick. Fans of Behemoth (particularly their mid-period work like Satanica and Thelema.6) will likely enjoy this record.

Lecherous Nocturne - Occultaclysmic
Lines are blurred between death and black metal in this caustic new release from South Carolina's Lecherous Nocturne
Reader Rating2 Votes
Brutal chaotic riffs that walk the line between death and black metal
Instrumental track in the middle of the album gives the listener a little breathing room
The songwriting blurs the line between black and death metal in the best possible ways
Not much low end in the mix, with bass often lost under the layered guitars
Mix might be a little too raw for modern metal fans
4