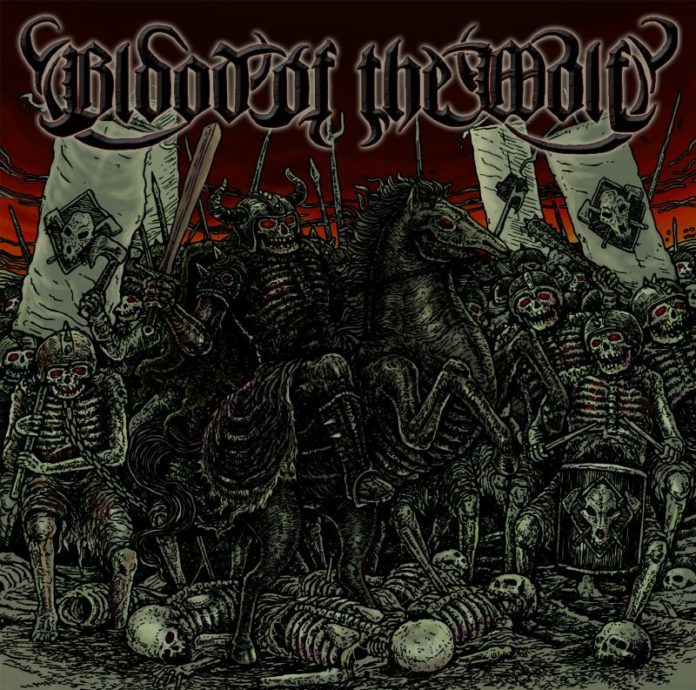 It’s pretty ballsy for a band to release their debut album with its number right in the title. After all, there’s no guarantee that they will hang together long enough to put out a second release. The stigma of being ‘that band that released Vol. 1 and then disappeared’ would be hard to live down, and that’s assuming their first effort makes enough of an impression for people to talk about them at all.

This didn’t stop Blood of the Wolf (not to be confused with Wolf Blood), who made that leap with their first album, the self-released I: The Law of Retaliation from the relatively sunny days of 2015, following on a 2014 advance single and a 2013 demo. Though that annual cycle of releases has been broken, the Chicago-based band is back with their second album. And while it would have been amusing to immediately drop the numbering, they’ve held on to it.

Is the wait worth it? If you like modern death metal with a blackened patina, then yeah, it’s worth your time to check this out. The beats are thunderous and fearsomely fast, the vocals are gnarly without being goofy, and the guitar-work cuts clean while carving out its riffs. Track titles like “A Sermon of Slaughtered Foes” and “The Sword is My Light and Salvation” underline the bellicose drive of the music, with the combination reminding of something like Necrophobic meeting Bolt Thrower.

While the music hits hard, it does start feeling kind of repetitive by the halfway mark, an especially bad sign when the LP only runs 36 minutes all together. A large part of that can be chalked up to the drumming, which hardly ever lets up in its trigger-blasting, but the rest of the songwriting draws from a similarly shallow bag of tricks. It’s not that the group is lacking in technique, just that they don’t show much inclination to turn their playing skills to more than a few configurations. It’s to the point where just switching up the guitar tone for five seconds (for a quick flourish in “With Fire and a Thousand Flashing Blades”) comes as a shock.

What Blood of the Wolf play is sharp, but it ends up feeling like one of those albums with an EP’s worth of ideas stretched out to cover an LP’s run-time. Fans of nasty and brutal death metal will find a fair amount to enjoy, and the narrowness of focus does fit with the style, but for the skills on show, it comes off as disappointingly limited. Whether they’d be better served by diversifying their influences (it’s not too much of a stretch for me to imagine them successfully emulating Acid Bath‘s metal potpourri) or just spending more time on writing songs that stand together instead of in isolation, is hard to say. Whichever way they develop, I hope their next album won’t end up being III: More of the Same.

THE BOTTOM LINE
Better in small doses than taken all at once, the music is cut too slim in its focus to go anywhere past where it begins.
Reader Rating0 Votes
POSITIVES
Sharp instrumental work
Good amounts of fury
NEGATIVES
Lack of variety
Oversaturation on drum blasts
The medieval flavoring doesn't really get any nods in the music beyond the titles and lyrics
3.5