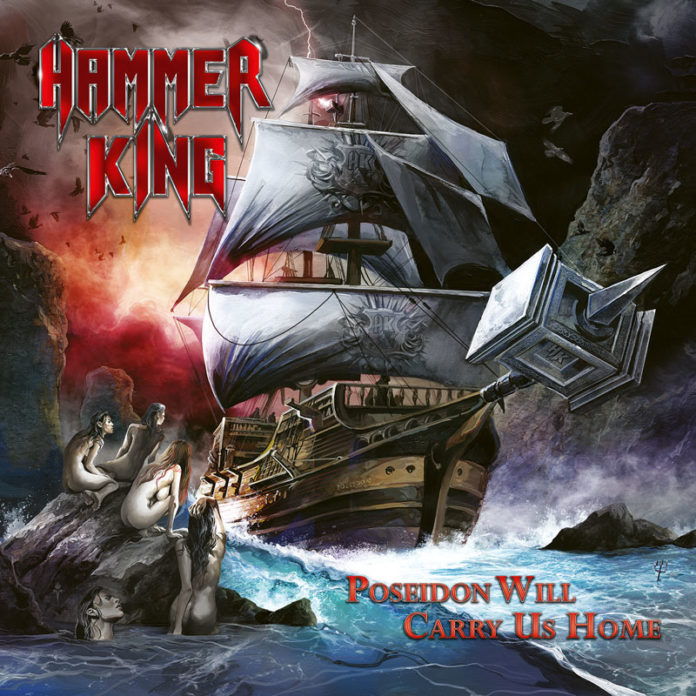 Kicking off with a short shuffle of percussion into the lead guitar riff, the title track of Poseidon Will Carry Us Home opens the album in a mood that tempers fantasy metal with some heavier grounding. The liveliness of the guitar in a quick solo stands out as the prime reminder that this is something from the more light-hearted end of the metal spectrum, and for most of the album’s remainder, that’s still the case. They may be singing about thunder, kings, wars, warriors, waves of the sea, and other topics that tend to be relegated to tongue-in-cheek ’80s ‘homaging,’ but Hammer King come off as surprisingly earnest, even with titles like “Battle of Wars”.

Admittedly, the sense of things being taken seriously does owe more to the instrumental facets than the singing and lyrics, but just by virtue of trying to find sturdy riffs and energetic solos, without getting too extreme on either front, the band manages to tap into some genuine ’80s heavy metal spirit. There are certainly some modern touches, from the production to the handling of the percussion, but they come smoothly enough to let the dominant atmosphere continue undisturbed.

Where the album suffers, unfortunately, is in the repetitiveness of the songs. There’s a fairly narrow band of tempos in which the songs operate, and the exceptions are few (though the half-minute “Last Rites” does make for an effective mid-way breather). When things do slow down, they’re soon ratcheted back up, and the highest speeds aren’t far enough from the average rate to make much of an impression (the opening to “Locust Plague” being a good example). As a result, the album feels a bit thin on content, despite its ~50-minute duration, and the sense of drudgery that sets in manages to firmly overwhelm the music’s good qualities. Penultimate song “We Sail Cape Horn”, the album’s longest track, manages to buck a lot of the baggage throughout its 7-minute stretch, but keeps sinking back under their weight; this is regrettable, since it would have been a good opportunity to show how much of a shift they could manage with that expanded room to play.

In the end, it’s more of a disappointment than an outright affront of an album, with quite a bit of potential put on display. Though they get worn out time and time again, the riffs are all pretty sturdy, the individual musicians play well together, and their sense of how to map out a song’s structure is respectable for a group on their third outing. If there’d been more variety in any of the approaches, this would probably be an album worthy of attention from heavy metal fans of many stripes. As it is, it seems destined to be forgotten until the band puts out a real winner, and even then it’ll be something for the devotees to rediscover while digging through the back catalog in the wake of that potential future success.

THE BOTTOM LINE
A surprisingly straight-forward throw-back to '80s heavy metal, but without enough variety to carry it through to the end, there's little reason to recommend it.
Reader Rating0 Votes
POSITIVES
Good playing
Workhorse riffs
Ability to play retro metal without making a joke out of it
NEGATIVES
Drastically low variety in musical style, tempos, riffing, song structuring, and mood
3

Iron Maiden – Nights of the Dead: Legacy of the Beast...