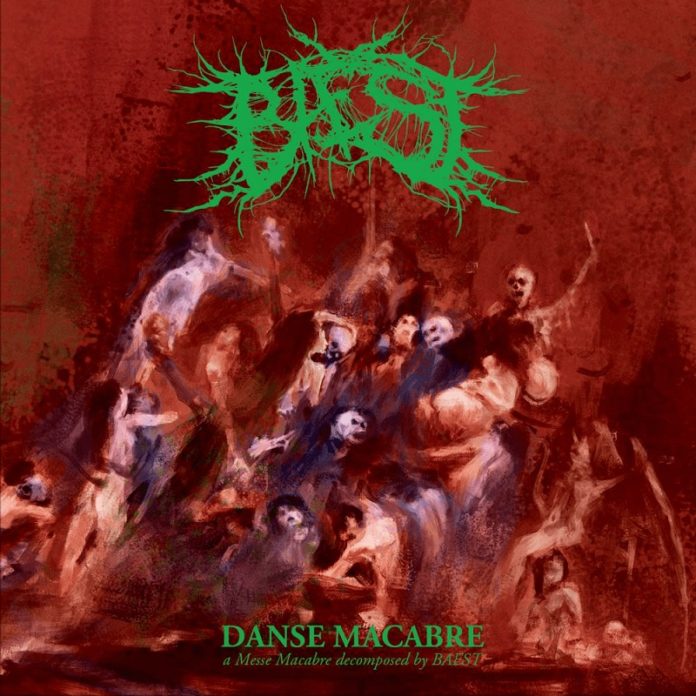 Of all the different scenes in death metal, one of my absolute favorites has to be the Swedish scene of the 90s and 00s. While a lot of focus has been placed on melodic bands like At The Gates and Dark Tranquillity, I’m particularly fond of the slightly more abrasive side of things, which includes bands like Entombed, Grave, and Bloodbath. Just as the Gothenburg bands spawned a lot of melodically-minded outfits, there have been a lot of bands that really took to the Boss HM-2 pedal-infused sound made popular by Entombed and Bloodbath. One such band is Denmark’s Baest, who are releasing their debut full-length album, Danse Macabre, on Century Media Records.

Having formed in 2015, Baest are a very young band, but on Danse Macabre you’d think they are already seasoned veterans. The band’s name translates to “beast” or “brute,” which is an appropriate moniker, considering how vicious the tunes on Danse Macabre are. “Crosswhore,” the opening track, makes it pretty evident that Baest aren’t interested in beating around the bush when it comes to creating sonic brutality. With a brief fade-in of some guitars feeding back, “Crosswhore” kicks off into a mid-paced romp reminiscent of the slower side of Bloodbath, dripping in malevolence and crushingly heavy. Vocalist Simon Olsen has a guttural tone that reminds me of Peter Tagtren’s (Hypocrisy, Pain) deeper growls, and really compliments the brutal attack of the rest of the band. There is truly not a dud on this record, with a good mix of tempo changes and dark melodies that would sound right at home on a black metal record, all while keeping that heavy low-end that death metal fans love. Though there are plenty of speedy moments in each track (complete with blastbeats), Baest really know how to settle into a good heavy groove, as can be heard around the midway point on “Messe Macabre.”

Another high moment on the album is the acoustic track, “Ritual,” which is entirely instrumental, and shows that Baest know how to work in some solid dynamics over the course of an album. That it doesn’t sound out of place alongside the rest of the much more brutal tracks is a testament to the band’s expert songwriting. The production work for Danse Macabre is excellent; despite the overly-fuzzy quality of the Boss HM-2 pedal, the guitars manage to not lose any clarity, and the mix manages to not get too muddy. The heavy low end in the mix really gives the slower sections a massive feel, like the riffs have taken the form of a giant monster crushing the city-folk beneath its feet. The bass and snare drums are emphasized in the drum tone, which is actually pretty brilliant, since the cymbals can often clash with the fuzzy overdrive of the guitars (some of Bloodbath’s records could have used less cymbal, for instance). While there is a lot of low-end in the mix, the higher pitched guitar bits aren’t drowned out, giving the tone a good dynamic range. The vocals are pretty high in the mix, but not overbearing; rather, they work in tandem with the brutal riffs to pummel the listener’s eardrums without mercy.

If you’re a fan of Swedish death metal in the vein of Grave, Bloodbath, or Entombed (mostly the first couple of records), you’ll find a lot to like in Baest. The fact that this is a brand new band is mind-blowing, when you think about how long it takes so many bands to put out an album of this quality. Some go their entire careers without crafting a record this solid. I highly recommend picking up a copy of Danse Macabre, you can hear for yourself what I’m foaming at the mouth over.

Baest - Danse Macabre
Incredible Debut from Danish band Baest. Recommended for fans of early Entombed and Bloodbath
Reader Rating3 Votes
Solid musicianship, with some truly brutal riffs
Deep guttural vocals give an extra layer of heaviness
Despite the super-fuzzy overdrive on the guitars, the production is excellent
If you're not a fan of the Boss HM-2 tone, this album is absolutely drenched in it
Eventually, the album ends
5