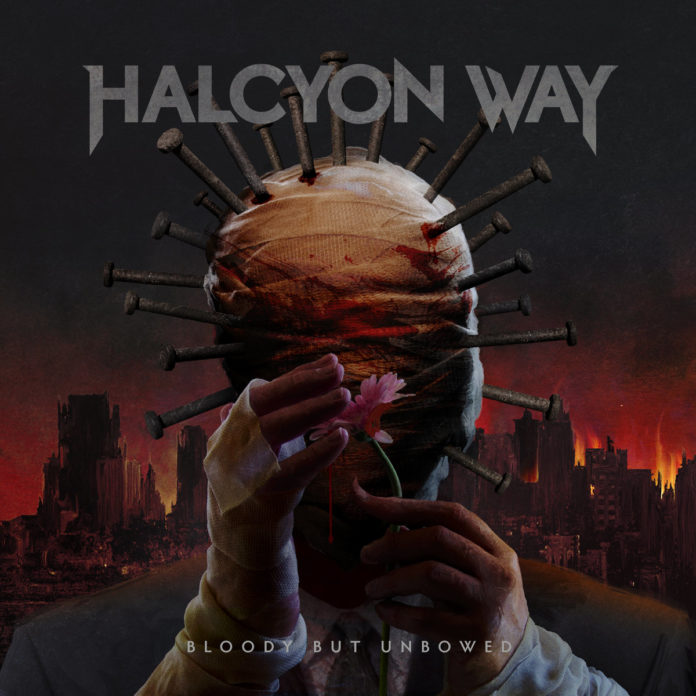 I’ve delved into a lot of different sub-genres of metal over the years (even, regrettably, nu-metal) and, for the most part, I’ve continued to enjoy at least a handful of bands from each scene. I truly believe each branch of metal has bands that are worth listening to, regardless of your chosen “tribe.” Halcyon Way, formed in Atlanta, Georgia back in 2001, take this notion a step further by playing a form of heavy metal that isn’t easily categorized to begin with. Having completed a European tour with Angra and Operation: Mindcrime earlier this year, they have returned with a new offering in the form of Bloody But Unbowed and hope to continue to make a name for themselves.

Bloody But Unbowed blends a number of styles over the course of 12 tracks, but manages to do so without sounding contrived. There are elements of power metal, particularly in the melodic vocal arrangements, with melodic gang voices often joining vocalist Steve Braun during the sing-along choruses. “Ten Thousand Ways” is easily the most melodic track on the album, and is probably the best example of the aforementioned power metal elements, with its catchy chorus and virtuosic guitar solos. Most of the album, however, has a heavier edge, with riffs that mix Testament-esque thrash with groove metal, and even a little bit of metalcore, and occasional progressive metal-style time signatures, as can be heard on “Superpredator.” One band in particular that I’m often reminded of is Nevermore, though in that Halcyon Way blend a lot of different sounds effortlessly, creating a sound that is technical, melodic, and at times, downright brutal, all at once.

While the band might manage to appeal to a pretty wide audience by including elements of multiple genres, there IS a chance that fans who prefer one sound over another might not enjoy Bloody But Unbowed. “Blame,” for instance, has a metalcore-style breakdown that might irk old-school metal fans, while the blazing solos and choral-style singing might sound a bit dated to fans that prefer bands with exclusively harsh vocals. There are harsh vocals often mixed in alongside the clean singing, which can also be a bit divisive, since some fans prefer only melodic vocals, while others prefer only growled or screamed vocals. Really, though, Bloody But Unbowed can be a pretty enjoyable record with wide-reaching appeal if you listen to it without having a preconceived idea of what to expect, based off the first track or two.

The production on Bloody But Unbowed is excellent; while there are certainly plenty of overdubbed guitars and vocals, the tone still has a lean, mean feel. The melodic moments absolutely soar, while the heavier bits are relentless. There are subtle touches that really caught me by surprise too; “Slaves To Silicon,” for instance, starts off with an EDM style beat with futuristic-sounding synthesizers incorporated, which ties in with the lyrics about being enslaved by computers. It’s simple yet effective, and this album is full of little Easter eggs like that.

Halcyon Way are masterful songwriters, and the production really highlights their abilities as musicians. Metal purists might balk at the elements that might not line up with their particular tastes, but, overall, I believe this is a record that can really have massive crossover appeal. This is an album that is definitely worth your time.

The Charm The Fury – The Sick, Dumb & Happy