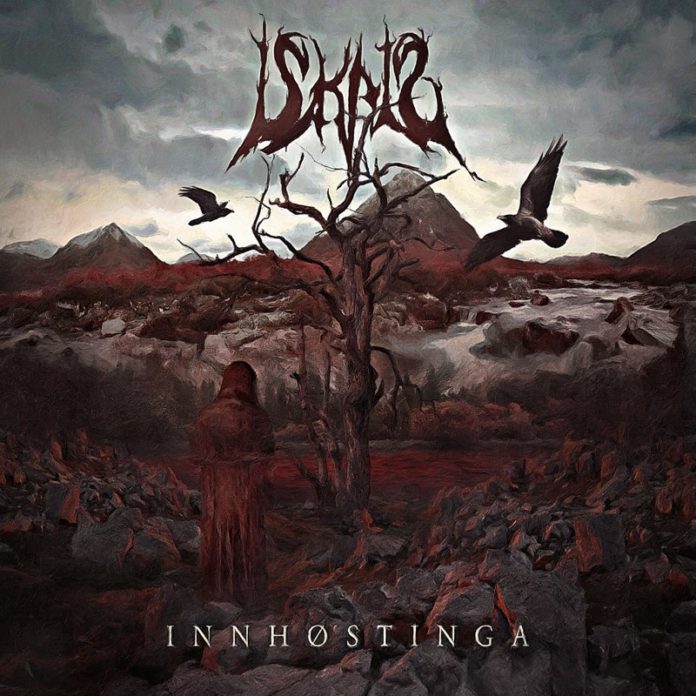 With their last release dating back to 2014, the Norwegian group of Iskald have had some time to re-center themselves and put some serious thought into the shaping of their new album. And though recording finished in late 2017, they’ve waited until now to release it, with the intervening time presumably being put to work polishing all the little extra studio details. Innhøstinga opens with a bit of song-writing that could be interpreted as addressing that hiatus, leading from a bit of down-mixed guitar strumming to a full blast of drums, bass, guitar, and rasping screams. It proceeds from there with striking confidence in the band’s interplay and, for the most part, that high confidence is not only earned, but used as a means to further build atmosphere and impact.

The melodic aspects are balanced well against the more vicious verve, and it reaches levels of harshness which should satisfy black metal fans’ criteria (aside from the small but persistent contingent who prefer theirs to sound like it was played in a closet onto a tape recorder). One complaint that can be leveled against the album is that the band doesn’t really veer too hard into either extreme for any notable stretch of time, so it comes off as too much of a compromise (or a happy medium) to really capitalize on the facility shown by the band in both directions. Having just one really harsh and one very melodic track (“Lysene som Forsvant” coming closest to the latter, though the hard drumming won’t let it fully embrace the melancholy teased by the guitar) would have done quite a bit to expand the band’s demonstrated range without veering into later-day Opeth territory. As it is, the extremities of expression are found in such equal measure (and relatively narrow degrees) that it feels like the band is under-cutting themselves with the determination to show how smoothly they can blend the two.

It’s not so much that the resultant music is lacking, because that’s very much not the case. The flights of tremolo are engaging, the raspy vocals (always a tough task of fitting) lodge themselves firmly into the musical action, shifting rhythms are handled with finesse, and the flourishes manage to feel genuinely cool and of-the-moment. The sticking point is that it ends up feeling as though it’s just expressing the same mood over and over again, with little emotional variance or mood arcing. “Even Dawn Drew Twilight” has a sweet-toned acoustic guitar break, lasting about ten seconds, and the switch in and out of it makes it fit without jarring the flow at all, but it makes the surrounding furor stand out in starker contrast for how restrained it seems. Small touches like the backing moans of “Resting, Not In Peace” similarly highlight how little additional detailing the core instruments receive beyond their relative mixing levels, when old black metal stalwarts like samples of distant rain or weeping could have not only added a firmer sense of place, but also provided some contextual humanization to the steadily hammering beats.

That the band plays well is not in question. But since its development as an identifiable off-shoot of general-purpose metal, black metal has emphasized atmospherics beyond provocative cover art and corpse-paint photo-shoots, and to lose that is to lessen not just its potency, but also its range of expression. For all the compelling riffs and incendiary rhythmic interplay Iskald deliver with Innhøstinga, it ends up feeling almost mechanical in parts, without the human element to make the rage mean something or lead somewhere. It shows impressive song-writing and wonderful polish, but without letting the wounded nature be shown, it’s hard to feel a connection to it beyond appreciation of the performance.

THE BOTTOM LINE
Sound from perspectives of instrumental work, album flow, and requisite intensity, but a bit too hollow in the soul department
Reader Rating0 Votes
POSITIVES
Strong melodies
Fierce playing
Effective control of the songs' energies
NEGATIVES
Basically stuck in one emotional gear from start to finish
A sense that black metal has become more of a job than a means of expression for the band
4