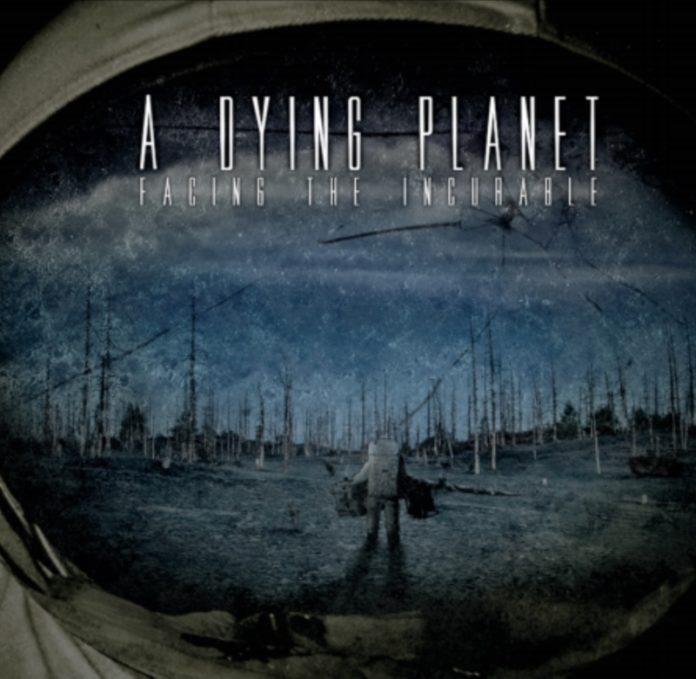 From the get-go it is clear that A Dying Planet aim big with Facing the Incurable. Not just bringing almost an hour of music to bear, but opening with a ~15-minute track, the band (featuring twin brothers Troy and Jasun Tipton on vocals and guitar/keyboards, respectively) comes off as bold, but talented enough to back up that attitude.

Mixing hard percussion with airy vocals, grinding bass, and twangy guitar timbre, opening track “Resist” capably demonstrates the group’s facility with flexible rhythms and change-ups, twisting from one passage’s distinct beats into something wildly different without losing the thread. Troy‘s vocals put in work to match, making jumps from reinforcement to powerful lead presence in the space of a moment, and keeping up with the energy at its highest points. The keyboards provide texture and mood enhancement without taking too much of the focus, and the flow of the song makes use of its lengthy run-time without it feeling like a drag.

Carrying on from such an opening is a tall order, but the band does just fine. Thankfully, they don’t try to make every subsequent song seem so boisterous, opting instead to show their range in moods and styles. Spoken-word remembrances mingle with plaintive wails, firm riffs give way to pieces more tender, and the prominence of each instrument is shifted to serve the song. With the first five of the total six songs, each running at least eight minutes, the record soon settles into a compelling flow, with more emotional depth than first impressions might suggest. It’s easy to get swept up in the momentum (no small thing, considering the size of the songs), and it’s a bit of a wonder how smoothly the album runs, from start to finish. When closing track “Separation Anxiety” kicks in with its hard bass-string plucking and guitar action, the preparation for the album to end is handled just as smoothly, with the three minutes and change of the song acting as a nice cap on the whole thing.

As a debut album, there’s a lot to appreciate here. While, thanks to their work in Zero Hour, the Tipton brothers have five albums of experience together, that’s not a direct translation into making a new band work. That said, the past work has clearly helped, and any roughness there might be with the line-up of A Dying Planet coming together is well obscured. It’ll be interesting to see how their sophomore album does, once they write all-new material (penultimate track “Missing” being something Jasun wrote on his own, eventually leading to the full band’s formation). Whether keeping in line with what they’ve done here or taking a new direction, it seems almost certain that the staunch musicianship and wide range will remain.

THE BOTTOM LINE
Full of surprises, with emotional maturity, flexible instrumentation, and thoughtful song-writing
Reader Rating0 Votes
POSITIVES
Clean production
Strong playing
Adaptive vocals
Shifting of the focus throughout the band
NEGATIVES
A bit lacking in hardness, which may disappoint listeners who are more metal- than prog-inclined
4