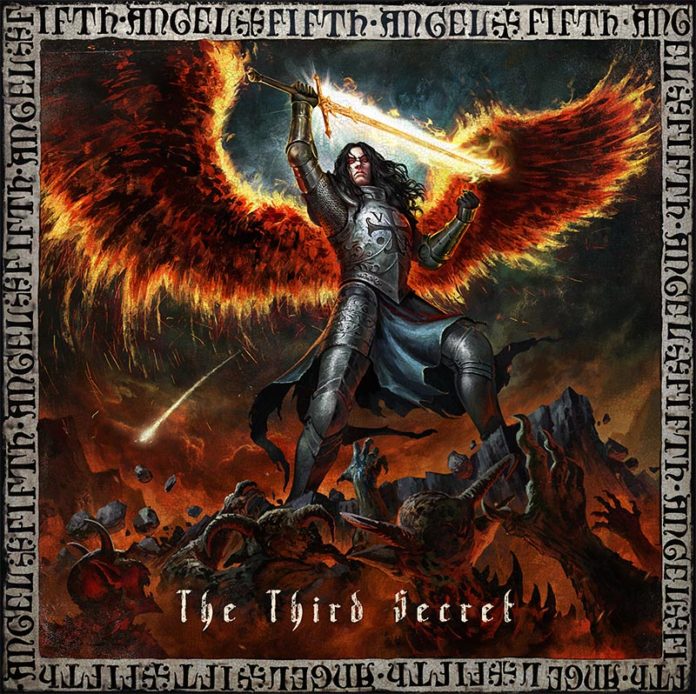 It’s been almost thirty years since the Seattle group of Fifth Angel released their last album, 1989’s Time Will Tell. Among the many other changes that have taken place in that three-decade interlude (including the ending of the cold war, and original vocalist Ted Pilot becoming a dental surgeon), the band has rearranged their line-up for this return, with founding members Ken Mary (drums, backing vocals) and John Macko (bass) and guitarist/lead vocalists Kendall Bechtel being the full crew for the former quintet.

Call it lead time, or a hell of a lengthy preparation, but the hiatus between albums is bound to have the real die-hard fans clutching their chests when they find out about the return. And it comes at the sweet spot of ~45 minutes, ideal for a full-packed vinyl release, while also putting in a thorough declaration of the shape of the band, without dragging on too long. Split between ten tracks, the album opens with “Stars are Falling”, letting its opening salvo of beats and shredding quickly put to rest any assumptions of rust on the players’ skills, and throwing some sharp hooks for good measure. The song is kept tight, and does a great job of opening the album, (re)introducing the band, and demonstrating the general vibes, neither cluttered nor basic.

From there on, The Third Secret keeps up its high-quality blend of old and new, with classic heavy metal firmness to the songwriting complemented by the sharper tones and higher emphasis on drums expected of modern metal. The boldness of the vocals is matched by the ballsy drum patterns and lithe bass-work, with the tight interplay of the three musicians at a very impressive level, and they pull the feat of giving each track a sturdy riff of its own with casual high style. They also find room for some slower grooves, as with the midway track “Can You Hear Me”, which does a lot for the album’s pacing, showing a different side to their talents, and gibing things a bit more emotional variance.

Variety is, unsurprisingly, the album’s weak spot. Though they make clear efforts to stretch their style in a number of ways, it does start to wear a little repetitive by the  second half. A little more instrumental material, some more breakdowns, and shredding would have all been welcome, as the vocals are the element with the narrowest range. While Bechtel does a great job, particularly in light of his double duty on guitar (which he rocks without exception), a little bit of those reedy high-pitched vocals from yesteryear goes a long, long way, and they dominate every song in the album. Though not really grating, it does stand out as the weak point in such a strong release. Outside of that, it’s a recommendation with no real caveats, as long as heavy metal is something you already dig.

THE BOTTOM LINE
An excellent return from a long-gone group, old fans and heavy metal enthusiasts should get quite a kick out of this.
Reader Rating0 Votes
POSITIVES
Tight band dynamics
A willingness to update their old style
Rocking riffs
Great drum-work
NEGATIVES
No big 'show-off' track
The vocals get a little tiring
4