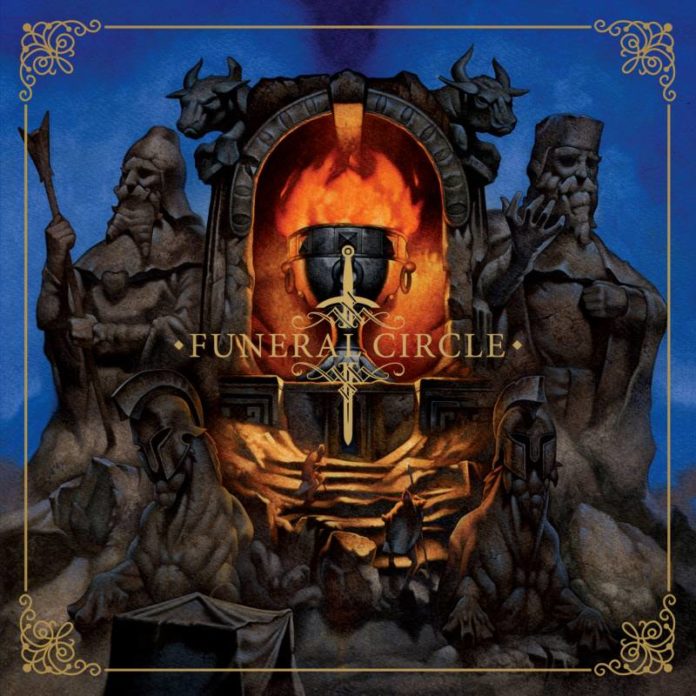 For such a supposedly influential band, you don’t actually see too many others these days who sound anything like Swedish doomsters Candlemass. One can’t argue that that band’s first few releases have stood as stunning examples of the genre, but most modern doom outfits seem to be more directly Sabbath-derived versus being products of the genre’s evolutionary chain.

So it’s refreshing to hear an act like Funeral Circle, who have taken that goth-inflected, half-speed-Maiden core and not only made a good, modern album with it, but taken it to places that even their mighty Swedish forebears wouldn’t have dared. Throughout the album they use acoustic guitars, as well as certain melodies and harmonies to conjure exotic locales in the mind of the listener. There is at times a quality to the music that isn’t dissimilar to Orphaned Land, minus of course the folk elements.

Another obvious trait that Funeral Circle has gained through Candlemass’s influence is a clean vocal style not far from that of Johan Längquist. While these vocals (supplied by now departed frontman Jeremy Hannigan) does the songs justice and adds sufficiently to the atmosphere, I found myself wishing that there was just a little bit more grit. Just the occasional growled segment would have been beneficial to the performance, but that’s a small criticism on an overall solid and fitting performance.

Probably the single best element of the album is the guitar playing. Guitar work in doom metal is truly an art form unto itself and it is one that requires much restraint and discipline on the part of the players. One has to resist the urge to be showy and play in a fashion that serves the song and the song alone. This is something that guitarists Matthew Barzegar and Stephen Mulleady obviously understand; it is abundantly clear that they are very skilled players, but their skills never eclipse the conventions of the songs. This balance is best witnessed in Mulleady‘s solo in “Corpus of Dark Sorcery”: a sublime, hazy passage that, if it were played three times faster, would sound like some of the best lead work of Kirk Hammett’s career. Here it sounds like the creaking and echoing of a haunted Scandinavian castle, and the songs are all the better for it.

This is a very interesting release from a very unlikely place. I never would have guessed that Vancouver could be home to such bracing, Swedish-styled doom. It’s very nice to hear a band that realizes that doom does not need to be ultra-distorted and down-tuned to be effective. Funeral Circle have, on their first full-length, managed to create some of the darkest and most oppressive doom you’ll find in a year filled with great new material in the genre.

The solo in the middle of Corpus is performed by me, not Matt.

I’m sorry about this error. Credits for specific solos were not included in the press package we received. Regardless, I have edited the review to credit you with the solo in “Corpus…”. Thank you for reading, for bringing the error to our attention, and for making a great record. I hope that despite that error you enjoyed the review.

Thanks for the flattering words, cheers! Keep metal alive.

Quick tidbit: that solo was inspired by the late and great Jerry Fogle from Cirith Until, I even used an octaver pedal just like he used on King of the Dead.

Headspace – All That You Fear is Gone