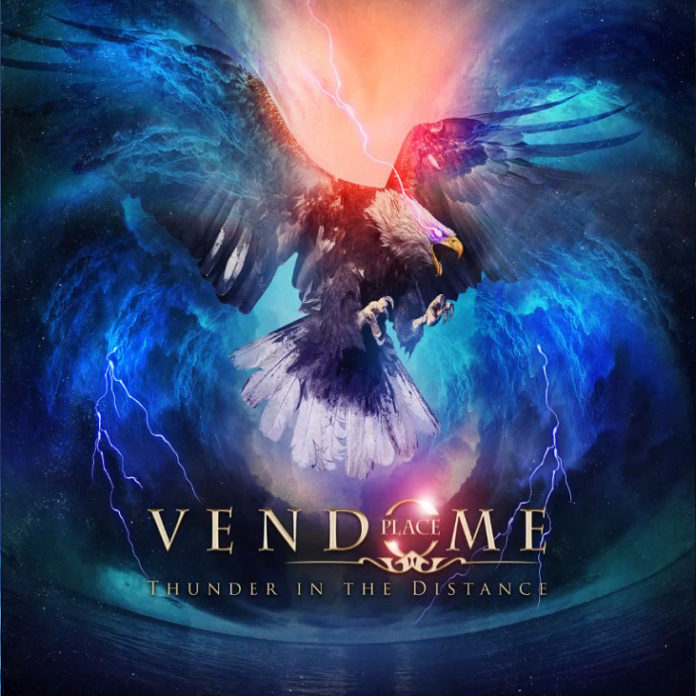 I can’t say that I know Place Vendome. While I am familiar with a big chunk of Michael Kiske‘s projects, I had somehow overlooked these guys. If you’re not “in the know” (and I sure as hell wasn’t) Place Vendome are a supergroup of sorts; founded by the president of Frontier Records, it features current and former members of bands like Pink Cream 69, Helloween, Unisonic and Vanden Plas.

Being the product of a band made up of performers, as opposed to songwriters, “Thunder in the Distance” includes the songwriting efforts of renowned artists like Timmo Tolkki, Magnus Karlsson and Alessandro del Vecchio. Despite what you might expect to get from the people who brought you songs like “Metal is Forever” and “Father Time”, however, Place Vendome are not a power metal band, and this is not a power metal album; hell, I wouldn’t even call it a metal album… but that’s not necessarily a bad thing.

“Thunder in the Distance” is an album that comes dangerously close to the realm of 80’s pop-rock or, if you prefer, pop-metal. Songs like “Never Too Late” and “Fragile Ground” (not to mention the pre-chorus of “Talk to Me”) would not seem out of place in an album that tried to revisit the glory days of hairspray metal bands. While they’re definitely not an 80’s band (for starters, they’re not shit, which sets them apart from hair metal bands) you can definitely hear the influence in the choruses, the keyboards and the overall ambience of the music.

For better or worse, any Place Vendome (or Unisonic) album will end up being judged based on Michael Kiske‘s performance. Being arguably the most famous member of the band, his presence is not “just” a musical asset, but also a hook in terms of audience reach. Following a tradition of great performances, Kiske does not disappoint, and delivers his lyrics in the masterful way he has crafted in this almost 30-year career (yes, it’s that long, look it up).

While Michael Kiske reached the peak of his popularity, and the beginning of his legendary status, as the frontman of the power metal band Helloween (even if this was tainted by his shameful and unfair post-“Chameleon” dismissal) he has demonstrated over and over again that his voice possesses the necessary versatility to tackle different projects. Kiske has excelled in all genres and styles, from the epic falsettos of Avantasia‘s “Reach out for the Light”, to the more pop-oriented vocals behind Kiske-Somerville’s “Silence”. Sure, we haven’t seen him doing some black metal-style growling, but maybe we can convince him to give it a shot. “Thunder in the Distance” is just one more example of his artistic versatility.

Speaking about Avantasia‘s latest release, “The Mystery of Time”, Tobias Sammet explained how some of the tracks in the album actually fit into the pop category, even if metal fans dread the word. As the appreciation for catchy choruses and hook-driven music seems to be a bit of a taboo within the metal community, Sammet‘s “coming out” as an occasional pop musician took some degree of testicular fortitude. Metal fans are a community where every step in the development of a band’s sound will be seen as selling out or, worse, “going mainstream”; and while it is true that some bands will pick their sound based on what’s popular, others will simply touch upon more accessible music simply because that’s what works for them. In my opinion, Kiske and Place Vendome are one of those bands; they’re made to play this kind of music, and it just works for them.

“Thunder in the Distance” is not an album for everyone; if you’re looking for Helloween’s Michael Kiske, then you should definitely give this one a pass. But if you are looking for entertaining, pleasant and hook-driven tunes, then this is definitely a great buy.

Then again, I might a be a sellout too. (Let’s get the bias out of the way: I like Michael Kiske; while (and I cannot stress this enough) we are far from being friends, we’ve corresponded for some time about religion, science and part of the things we touched upon when I interviewed him. Because of this, and even though I was never a massive Helloween fan, there is, and probably will always be, a soft spot in me for this guy. He’s just such a nice person that it’s pretty incredible to think that he has been part of some of the most successful non-mainstream metal bands. While I believe that my analysis of this album is as objective as all my reviews are, I think that I owe you this much honesty. )