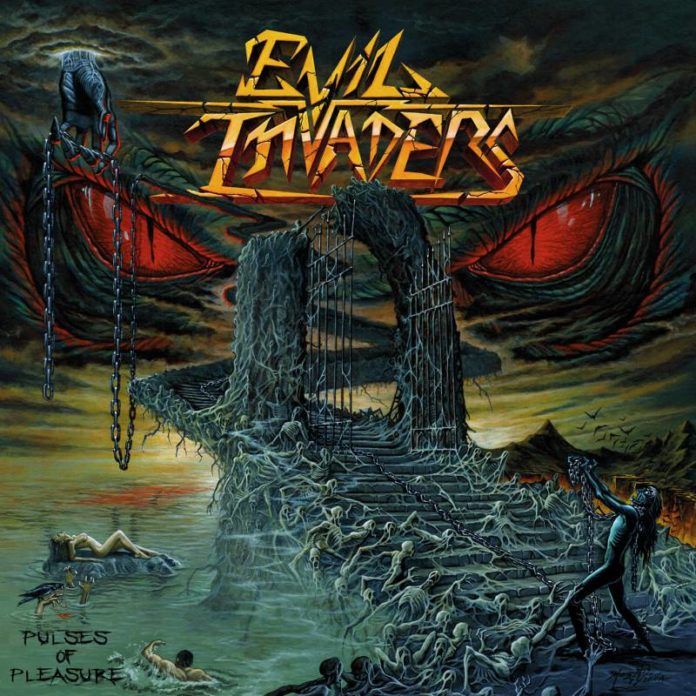 To me, and I’m definitely showing my biases here, the best metal never forgets its roots in the gleaming circuitry of Judas Priest and Iron Maiden. This is especially true of thrash metal, where I feel that a touch of old-school grandiosity can truly elevate a band above much of heavier-than-thou rabble that populates the genre. This seems to be something that Belgium’s Evil Invaders hold on to as well, since even though Pulses of Pleasure is one of the fastest albums I’ve heard in some time, it doesn’t skimp on the over-the-top old-school trimmings.

The band wastes no time in going for the throat; “Fast, Loud ‘n’ Rude” unleashes Joe‘s falsetto-laden roar, recalling the late, great Paul Baloff. That all-out speed-ball is followed by the album’s title-track, which showcases the band’s more traditional-leaning, epic sensibilities, especially as it comes in to the its melodic, Maiden-esque outro section. For a band that’s so squarely speed metal, they show quite a lot of diversity in their moves.

The guitar work throughout the album is absolutely superb, lead guitarist Sam Lemmens creates the most compelling leads I’ve heard this year, equaling the superb work done by Zach Slaughter on the last Skull Fist album. More importantly, the riffs that he and Joe work throughout the album are very varied and interesting. There are riffs that sound like black metal à la Immortal, laser-precise galloping glory like Agent Steel, dirty street thrash in the vein of Razor, and so much more. Somehow the band have made the myriad riffs styles work together beautifully. The effect is pure, engrossing, aural insanity.

If Evil Invaders have any problem whatsoever, it might be that there’s just a bit too much speed. It’s shocking that, with such stylistic variety, the one thing the band neglected to play with is the throttle. The whole album is just fast one, after fast one, after fast one. Sometimes true heaviness comes from easing back on the throttle and riding a really great groove before pushing it back to the wall. Look at the best works of bands like Metallica and Slayer; sometimes the most effective use of speed is to compliment it with crunch.

Minor complaints aside, this is probably the best debut album I’ve heard in a very long time. Evil Invaders sound more fresh, authentic and interesting than can be believed. It’s been eight years since the band’s original formation and Pulses of Pleasure shows that it was definitely worth the wait. The first “Buy or Die” album I’ve heard this year. Own it!

IN A NUTSHELL
Evil Invaders have crafted the first buy or die record of the year, and the best debut album I've heard in years.
Crystal clear production
Fresh and exciting throughout
Incredible lead guitar work
Unique, engaging vocals
Some of these songs would benefit from easing back on the throttle here and there.
5